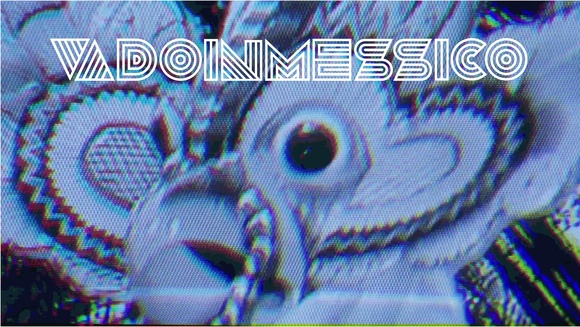 A fresh wave of Psychedelic-Pop of five individuals inspired by exotic places and their own manifold origins: Mexico, France, Italy and Austria, now based between London and Berlin.

The first longplayer "Archeology of the Future" already brought them on the road around the globe, with their buddies Crystal Fighters and in various Festivals, being highly acclaimed by BBC's Huw Stephens. Finally new works are ready which combine the tropically appearing latesummer duende of their prior album with the sounds of progressive and danceable electronic Popmusic. What remains is the colourful, a bit lugubrious nostalgy of afar.

If the interaction between water and sunlight could be used as a filter for sound it would produce a shiny, colourful, rhythmically complex and elusively distorted result. VADO IN MESSICO’s music is a catalogue of submerged images, the exoticness that reaches the outer space, lost in the time confusion they call the Archaeology Of The Future, sometimes returning to the urban centres. There, in the blurred memory of an end-summer's night a Roman bus-driver displays “Vadoinmessico” – “I go to Mexico” as the destination of his shift’s last journey, unwittingly naming the band.

The psychedelic-pop outfit features five individuals inspired by distant places and their own manifold origins: Mexico, France, Italy and Austria. The band was formed in London in 2010 and a first EP immediately brought them to Texas to play SXSW, where they were handpicked by NPR’s tastemaker Bob Boilen to record a live session for his “Tiny Desk Concert”.

Their self-produced debut album “Archaeology Of The Future” was enthusiastically received and led to a BBC Radio 1 live session for Huw Stephens who named them the best band at Eurosonic 2012. Their music has also been played and supported by some of Europe's leading radios including XFM (UK) France Inter (FR), FM4 (A), RAI (IT), FLUX (DE), 3FM (NL). Artists such as Crystal Fighters, Lapalux and Paddy Steer, have remixed their songs, expanding the band’s profile.

Throughout 2012 and 2013, the band has toured Europe extensively, both as headliners and supporting artists like Crystal Fighters and Fat Freddy’s Drop. They have performed at some of the main festivals in the continent including Eurosonic (NL), Latitude (UK), Green Man (UK), Womad (UK), Dot To Dot (UK), Rolling Stone Weekender (DE), Secret Garden Party (UK), DeBeschaving (NL). Vadoinmessico have also returned to the US in October 2013 to perform at CMJ Music Marathon (New York) and Filter magazine’s Culture Collide (Los Angeles).
A first insight-view into their future album has been revealed online in late 2013: the psychedelic tropical track and video of Perfect Strangers generated immediate interest and were premiered on Noisey (US) and The Line Of Best Fit (UK).