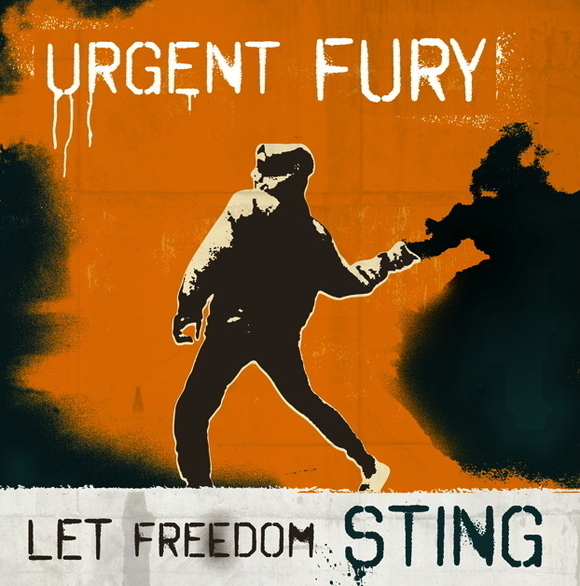 "...Then the jukebox was plugged in abruptly & played Big Youth's "Screaming Target".

The cord was yanked again. A hardcore band, URGENT FURY, performed a clutch of political songs that gored. First the statement, then the explosion."
— RJ Smith, THE VILLAGE VOICE

In 1985, a Puerto Rican from the South Bronx named Abraham Rodriguez gave a demo tape to Jeff Rogoff. The two met at City College of New York through a friend who heard Abraham was looking to form a band. Jeff knew a drummer, Harry Viderci from the SIC FUCKS, and the three of them began to play as URGENT FURY.

The band combined speed with melodic punk and rock riffs influenced by “The Clash, Stiff Little Fingers, and The Who,” according to an early self-description written by Rodriguez on a flyer someplace, Abraham being not only the songwriter but a ranter and a raver who began putting out a “rant sheet” known as STATE OF FURY, handed out free at gigs or found in record stores and fanzine shops, a tradition later mentioned by lead singer Sam McPheeters from BORN AGAINST as “an inspiration”, rag sheets that actually criticized and railed against what was going on in the New York hardcore scene… URGENT FURY expressed the disenchantment with the New York scene that many punks felt at the time, as it degenerated into a metal mayhem far removed from its punk roots, philosophiocally as well as musically. With songs like “58,000 Dead”, “American Nazis In Chicago”, and “Body Count”, FURY established itself early on as a political band in the “Peace Punk” scene along with bands like THE FALSE PROPHETS, A.P.P.L.E., REAGAN YOUTH, HEART ATTACK, and VIRUS, all critics of Reagan’s foreign policy. Rodriguez’ songs tended to tell stories rather than preach, “a fist slamming against the wall,” as Joe Strummer once put it, “political without being didactic,” according to TIN PAN ALLEY, a ranting rave put to music that “pushed the limits of hardcore and punk,” according to JERSEY BEAT. The band banged around the NYHC scene for 8 years, going through a few bassists in the process, opening for SCREAM at CBGB’s, and gigging with bands like STISISM, MARGINAL MAN, OSKAR, FALSE PROPHETS, A.P.P.L.E., at places like NEITHER/NOR, TIN PAN ALLEY and ABC NO RIO, written up in THE VILLAGE VOICE, JERSEY BEAT and MAXIMUM ROCK’N’ROLL, where Tim Yohannon described URGENT FURY in 1990 as “THE CIRCLE JERKS meet JIMI HENDRIX.” Live appearances on Pat Duncan’s WFMU show. The band released an early demo cassette and live tracks recorded at Donny Fury’s studio. Some of these, along with 5 songs recorded at Noise New York with Kramer (HELMET, GG ALLIN) eventually ended up on the Urgent Fury 10″ Record put out in 1992 by BROKEN REKIDS. There was also a split single with YOUTH GONE MAD which was released just before Abraham Rodriguez split up the band in 1992.

CUT TO 2011. When BROKEN REKIDS approaches Abraham about putting out a reissue of the original 10″, he decides to record all new versions and reforms a new FURY in New York. This new FURY features Geena Spigarelli on bass and Kaleen Marie Reading on drums, and not only records 22 tracks at John Mollusk’s studio in Brooklyn, but even plays a gig at The Charleston Bar. The album, “Let Freedom Sting” is drawn from these sessions. But a FURY based in New York would be a temporary measure at best because Abraham lives in Berlin, Germany, and so the concept was unworkable. Still, a great amount of music was made, recorded and preserved on video too! BROKEN REKIDS didn’t want a new band though, so Abraham decided to release the new Urgent Fury album himself. “I was kind of bummed I couldn’t make more out of it right then and there,” Abraham said, “but the experience convinced me that I really want to do FURY. The music feels fresh and new every time I play it and now all I need to do is form a band and grow it into something.”

The album is called “Let Freedom Sting”. It includes 13 tracks and is a good place to start getting an idea of what FURY is about. But it’s “just” the beginning of an idea, the first part.

In 2013, Abraham formed a new URGENT FURY in his hometown Berlin, ready to gig out and put a new face on URGENT FURY music. The band is doing some new recording of its own to supplement the already large UF catalog.…...