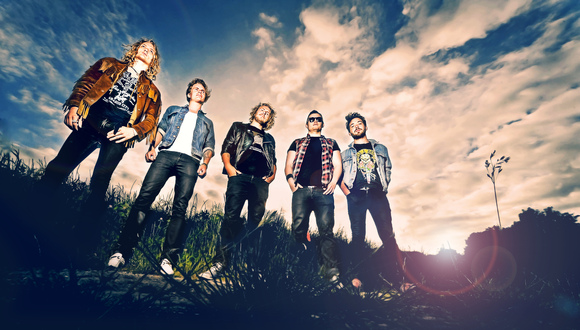 ”I’ll show you, washed up sucker, how it’s done! I’M GONNA FIGHT MY WAY!”
TurboChild are here to have a rock party and you are gonna come along! Combining a long history of rock with an ear for writing catchy songs and oldschool musicianship, TurboChild is a fresh new rockband from Denmark. Born and raised in the outskirts of Aarhus, the young quintet TurboChild (formerly known as Six Barrel Syndicate), has risen through the underground like a wildfire with their well-blended cocktail of catchy songs and explosive live energy.

TurboChild combine the groove and musicality of the 70′s with the hard-hitting riffage of the 80′s rock’n’roll scene, which have impressed audience and critics. As a live band TurboChild are known to deliver concerts that will bring about the party, and a serious pressure on your eardrums. Top that off with a live-energy that spreads to frontrows and bar-hangers alike.

So cut the sleeves of that stinking old denim jacket of yours, bring the old lady and join the party under the motto… This shit ain’t rocket science, it’s just good old tap-your-right-foot-rockn’n'roll with a badass attitude!

TurboChild released their debut EP “TurboChild” through Enough Said Music, on february 3rd 2014. Produced and mixed by Jacob Bredahl (The Kandidate, Hatesphere) who previoulsly worked with bands like Dance With Dirt and Supercharger. The EP was selected as “Demo Of The Month” in danish national music magazine Gaffa, who wrote “…TurboChild is a band I must see live soon. They were good as Six Barrel Syndicate, but now they are better!”. Read the 5/6 star review in danish here: http://gaffa.dk/anmeldelse/79865

From February to March 2014, TurboChild hit the road bigtime, playing 18 gigs in 2 months!! The "Let It Roll Tour", as the boys named it, brought TurboChild all around Denmark supporting bands such as Go Go Berlin (DK), The Beards (AU) and Dance With Dirt (DK).

TurboChild is now looking forward to play shows during the summer, and to start working on new material as they fight their way.