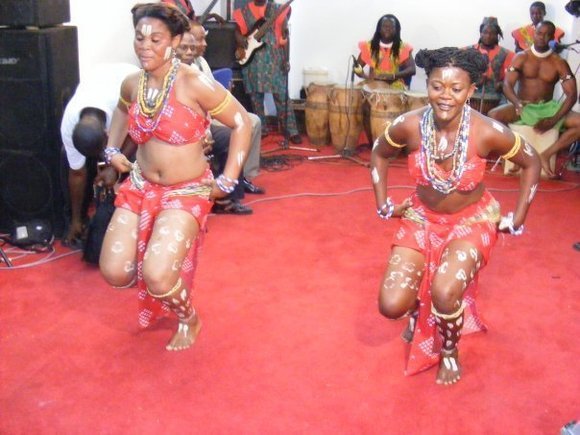 Tsooboi Ensemble are performers of folk music and traditional songs in Ghana.

Over the years, we have failed to project our music heritage with the required impetus to the global stage.
The resultant effect coupled with the unprofessional approach to the Arts among other challenges on the part of the Artistes has reduced our rich traditional music to mere cultural troupes.
In essence, our arts in this regard have failed to gain the needed recognition. It is against this background that Tsooboi Ensemble was formed and registered on 16th of January 2008 to lift our rich folk music and traditional songs with the introduction of what we call 'bamboree jazz' to address the short falls in our musical performances. Thus, the adoption of the name 'Tsooboi' which is a jargon widely used among Ghanaians or in the local parlance to mean an instantaneous wake-up call to a task.

The group's music and performance is heavily influenced by West African music that is singing, drumming and dancing which is interlaced with some Western and Caribbean rhythms generated through various instruments to create a new ideal sound which we call 'bamboree jazz' that can capture global audiences.
Our motivation and inspiration comes from the idea of employing relatively unknown musical instruments and the opportunity to project our African heritage through our own created sound' 'bamboree jazz'.
All performing members of the group are thirteen (13) seasoned performers and instructors in Ghana. The group has been performing together since 2008 on different platforms in Ghana and is ready to launch unto the African and the Global stage.
The group writes, composes, arranges and plays its own songs. Some of their performances have been captured in the mainstream media in Ghana and notably among them are the Daily Graphic, and New Times and the Insight News papers among others. Other media include Net2 Television, TV Africa and Metro Television.

We employ peculiar indigenous African instruments such as Jembe, set of bells, calabash sets, Kpanlogo and Ewe drums sets, Fontomfrom and Atumpani drums. The main Caribbean instruments used are the steel drum and acoustic box sets. The above instruments are fused with Western ones like Guitars (lead / bass) and saxophones.
The Future

For us at Tsooboi ensemble, to say the future looks bright is an understatement.
We are poised to take this new rhythm to all corners of the world through the application of appropriate industry practices in the world of Arts.