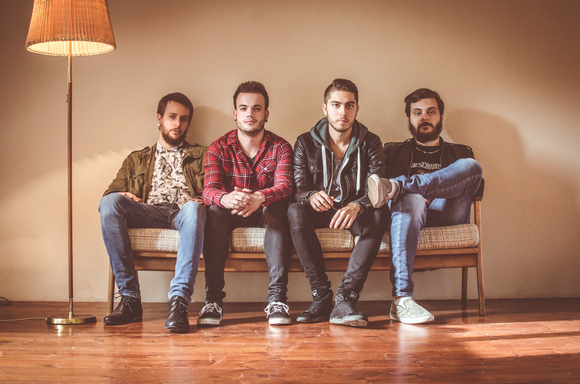 Thoughts of the 4 consists of 4 highly motivated musicians, each one inspired by various artists and genres.

Influences go from the extravagant guitar playing of Jack White over the sheer power of post-hardcore-bands like Dance Gavin Dance, the musical genius of alternative-rock-legends Biffy Clyro, all of this rooting in the raw sound of the early 2000's punk rock.
This results in a sound the band considers to be Indie Punk Rock.

Thoughts Of The 4 is a young Indie Punk Rock band from Luxembourg, formed in April 2008. After months of rehearsals the band started playing gigs in small venues and after a couple of years trying to fully integrate in the local music scene, they recorded and released their first EP called “No Risk No Punk” in 2011. The band hit the stage of the main local festivals where they shared the stage with bands like Royal Republic, Puggy, Eternal Tango, Mutiny On The Bounty, Versus You, Angel At My Table and many other artists.
TOT4, as they also like to be named, participated at a number of contests where they won different prizes. 2010 the band was nominated in the category “best newcomer band” at a national musical awards event, that year they also got 3rd at the NETROCK festival in Luxembourg’s main venue the “Rockhal”, they were the most voted Luxemburgish band. 2011 they won the prize for the “best live performance” again at a contest in the same venue. 2012 the band managed to play on the Rockhal stage again but that time as support band for “The Subways”. A month later the band shared that stage again with local bands Project 54 and Porn Queen. April 2012 the 4 went to France to record their new EP called “Battles and Sunsets”. During the summer, the band played several gigs at important festivals e.g. Rock um Knuedler and E-Lake, they hit the main stage of both festivals with artists like Emil Bulls, Roger Hodgson (Supertramp), Kool Savas, Inborn! and many more. September 2012 the band released their second EP “Battles & Sunsets” and their single “The City Is Burning” reached place 4 in the national charts.
In September 2013 they released the Single "I Don't Give a Fuck".

After a small tour leading the band just as far as the town of Prague, they are focusing on writing and producing their first full-lenght release.