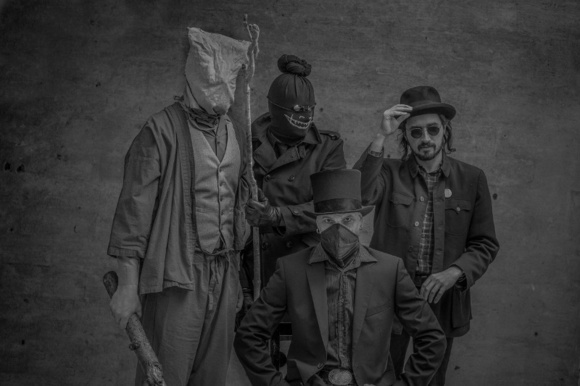 A fascination of death, doom, spiritualism and corruption has gathered the members of THEN COMES SILENCE, together with a predisposition towards noiserock, goth, shoegaze and psychedelia.

The band brings darkness and romantic death via music and sounds, performed on guitars at deafening volume. Cathartic, distorted and effect-laden.

Sweden’s captains of thundering postpunk, noisy psychadelica and dreamy goth-gaze are back in the same pitchblack waters as before. As follow up to the self titled debut, the quartet now presents Then Comes Silence II. The fascination for doom, darkness, death and the ghastly and terrible is intact and the band navigate a steady course towards the same destination.
The debut album from 2012 attracted attention widely and was praised for its apocalyptic message and dystopian soundscape.
That same year, Then Comes Silence were requested to be the opening act for A Place to Bury Strangers for their Stockholm visit, the first live-appearance for the Stockholm quartet. This was followed by a performance at the prestigious Roskilde Festival in Denmark. All in all an eventful journey in less than one year.
The work on the sequel began as the debut was still hot off the presses. In a short time span, the band had to undergo some serious changes as two members left the group. After this alteration and intense sessions, the result is on the horizon.
As before, the singer and bassist Alex Svenson (Sad Day for Puppets) is the main composer. This time Svenson has achieved something even more black and gritty than the debut album. Anna Eklund (Sad Days for Puppets) also returns in the duet and single "She Lies in Wait".