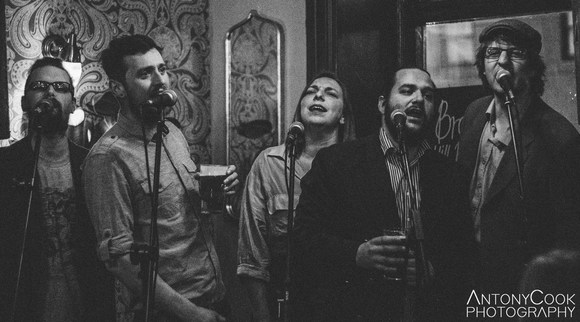 I doubt any of Bristol's The Longest Johns ever imagined they would be able to get so far on just five voices.

In a few short years they have gone from singing sea shanties in a kitchen to International folk festivals, tours, TV appearances and a Youtube channel with over 27,000 subscribers. They work through a fantastic catalogue of sea songs, folk songs and their own foot-stomping creations, all hanging on their incredible harmonies and captivating stage shows.

After gaining notoriety appearing on Gareth Malone’s “The Choir” for the BBC, The Longest Johns released their first album ‘Written in salt’ in the summer of 2016. After extensive summer shows promoting the album, including festivals in France, The Netherlands and Germany, the group began to turn out more shows in the UK supporting such heavyweights of the folk scene as Phil Beer (Show of Hands), Fisherman's Friends and Jim Causley. By the time of their second full length release 'Between Wind and Water' in the summer of 2018, The Johns had started their own Sea Shanty festival in Bristol (The Severn Seas Festival), become a staple act at festivals and music venues spanning the coast and begun live-streaming shows on Youtube to over 1000 live viewers a time. As the year progresses, they hope to perform for new audiences in new places and watch a great many more heads turn.