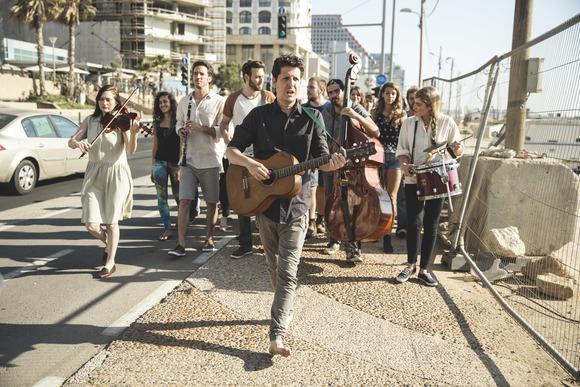 The Angelcy (which they prefer spelling “theAngelcy”), was first a song cycle, a lyrical and musical universe by the then homeless and completely unknown singer-songwriter Rotem Bar Or.

The songs were influenced by early blues, hippie music (songs you can hear in hippie
gatherings, around the fire), roots reggae and roots music from other places in the world,
coupled with some esoteric, relatively unknown musicians and writers (“Me We a New Religion”
and “Sons of Noel and Adrian” among others). Strong emphasis is put on lyrics, exploring great
universal fears and hopes via very personal statements.

During 2011, a group of musicians gathered around Bar Or, to set up the band known as
theAngelcy. The band consists of six members (two of them left and were replaced during the
past six intensive years) playing the Viola, Clarinet, Drums (two drummers on one drumkit,
unconventionally playing standing up) and Double bass, to Accompany Bar Or’s guitar. All band
members sing, and are all multi instrumentalists. The band arranges all the songs together, and
are very much into investigating group work.

In the spring of 2015 band's first album ("Exit Inside") was released worldwide by Jive Epic
France (a Sony label), and the band continued to extensively tour Europe and Israel.

In 2018 the band celebrated the release of its second studio album, "Nodyssey" with a sold-out concert in Hangar 11 in Tel Aviv, with 2000 dedicated fans in the audience, already singing along songs from the new-born album. The release was followed by a European tour of 22 concerts in Germany in France, continuing the band's deepening relationship with fans in these territories.

In 2019, the band will continue to tour and promote their new album, with the intention of
opening new territories in Europe (Netherlands, Sweden, Denmark, Italy, Austria, Spain,
Portugal, etc.) as well as reaching new destinations in America, Asia and Australia.