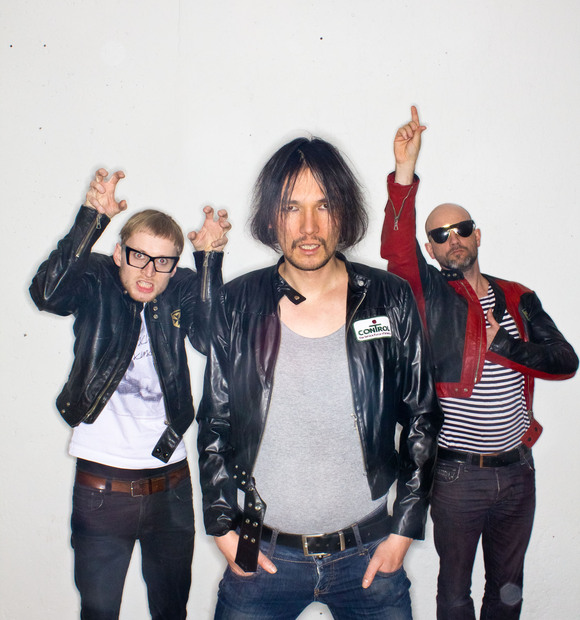 Dear people of the world. We have completed some recordings and we are about to present them to you in the shape of an album. We know. You will say: „Tell us what this is all about, and we won’t take no for an answer!“ Well, you know how it’s done, you know all these empty words, you’ve heard and maybe even said them many times: „best/most personal record yet“, „combines this shit with that shit“, „bla“, „future of asswhiping“, you can cough up your own „explanation of the album that will help sell it (we hope)“. So maybe for once we can avoid cutting the cheese big time here.
There’s been a study about the new record, and little to our surprise it was made out that if you ask a thousand people for their favourite three songs on it, barely 2 out of a hundred come up with the same three songs they like. Most of these people also stated they hated all the other songs. What do we learn here? Really nothing, this is a made up study, how could we afford to commision such a thing? But still, this is how we imagine it to be.
Hey guys, I hear you ask, could you please do different music? Can’t you just adjust to one more or less likeable style of ...stuff you do and stay with that, in that way inducing success in the entertainment world? Let us tell you, in our heads we do. We also try to be adorable teenage heartthrobs with abs of steel and eyes of velvet. But. Not unlike a lot of the ideas in our songs, we have been around the block a few times. So sadly, any spark of a fresh concept we can come up with will be diving through a sea of bullshit that has accumulated in our minds over the years. By the time it comes up gasping, it will look kind of stained by default. So that’s a problem. But there’s hope. We can still become successful by chance or by misunderstanding!
Hey, we don’t want to sound all negative here. This is not a suicide note. We’re alive and kicking! (See how easy it is to look dated?) We still have our eyes firmly fixed on the Olymp of pop music and we’ll keep climbing until we are there. In the meantime we’ll just continue to love you. You know, we just wanna take you home and hug you and squeeze you and call you George. What else can we say that we don’t say in our music? Not too much, some stuff has got to stay in the dark. Just this: As much as a record or any piece of entertainment is an attempt of its creator to fill his pockets with your money, it might also be a tool of inspiration, a fun way to spend a few minutes, a source of joy or an unexpected view into the workings of the mind of another person for you. Thank you.