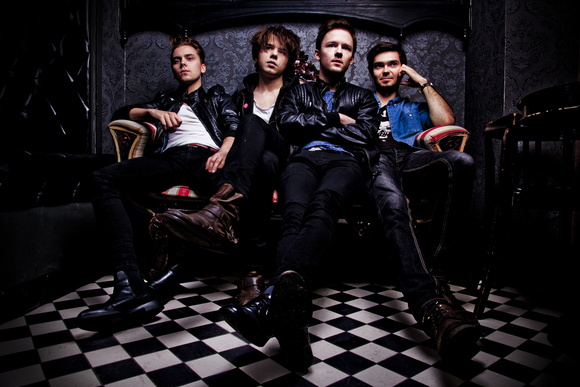 The Sunlit Earth come from a God-forsaken town, which also happens to be Poland’s ‘Pole of Cold’ - Gizycko. The group was formed in an act of self-defence in the face of the oncoming winter, said to be the hardest one of the century. In order to protect plants, friends and random persons, the band members composed several fiery tunes, which they have since – modestly, but stubbornly – presented live for the pleasure and benefit of their viewers.

Despite their relatively short experience, they have already won acclaim at local music competitions and played alongside important Polish bands. In August 2012 they played their first foreign gig in Kassel, Germany, as part of the Temporary Home project. They were also invited by The Raveonettes to be their support at the concert at B90 club in Gdansk in September 2013. Their music is frequently played by national radio stations, especially Polish Radio 3 “Trojka”, for example in “Offensywa” – one of the most popular radio shows in Poland presenting alternative music. In 2013 they were also voted one of the most interesting Polish newcomers and selected by the Polish Radio 3 listeners to play alongside the most acclaimed Polish alternative rock and hip-hop bands on the stage of “Meskie Granie” Festival.

The group is currently most active on the Tricity (Gdansk –Sopot –Gdynia) music scene, so joining forces with the local Nasiono label seemed like a natural progression. The Sunlit Earth's first EP, There's Something in The Air, was released by Nasiono Records in February 2013. Their debut album, Between The Lines, was also released by Nasiono Records on 23 February 2014. The official premiere of the album was conjoined with The Sunlit Earth’s concert in Radio Gdansk studio – a live broadcast.

In march 2014 TSE embark on a tour promoting the new album in Poland.