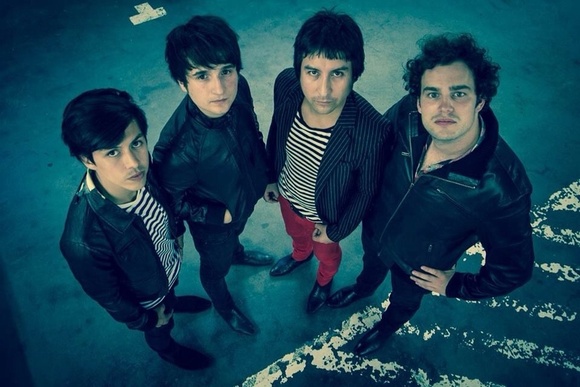 It is the sixties.The cradle of inspiration.

A Rickenbacker, Vox boxes on a white stage. Influence to millions, the starting point of England..s dominance in world wide Rock..n Roll.The sound of a new musical post-war culture, spreads to Chile with an intensity. A call for two Chileans who choose to follow it over the Atlantic ocean. After arriving in Europe they settle in Stuttgart to celebrate with congenial mates the most important thing in the world: the craving for music, Rock..n Roll, for amplifier..s feedback, pointed boots and giant semi acoustic guitars.

In memory of Stuart Sutcliffe THE STUD is born. Soon, a new and unique sound is created. The Sixties do not remain the major inspiration. Furthermore it is the psychodelic touch of "Tomorrow never knows", the easy-to-dance progressive rhythm of The Strokes with a strong influence of Northern England.
Since the first sound has been created, the Stud has been travelling around Germany to spread the joy established with their music. As soon as they put their guitars down and a crowd of chucks and tight pants tries to get rid of the dancing sweat, not only The Stud says "There's always something"!