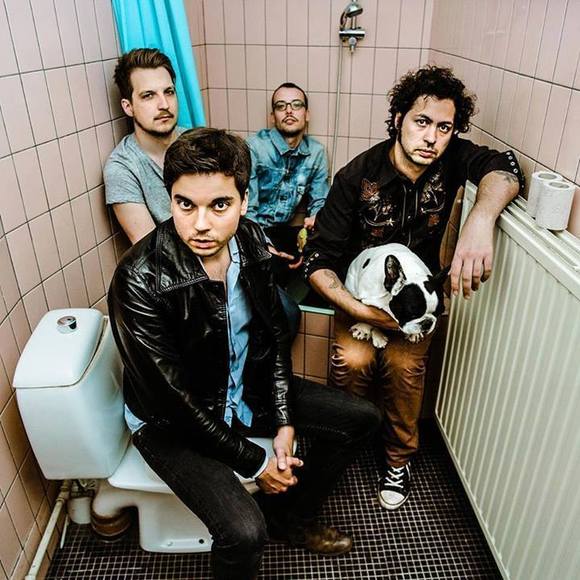 In 2010 The Sore Losers came in second in Humo's Rock Rally, Belgian's biggest music contest for new bands. The jury report stated: "At times they resemble the Raconteurs, in doubt between loud or quiet, headbutt or dialogue, squeezing the buttocks or whispering in the ear, and the ease with which they combine both, often in a single song."
Only a few months later they played the Pukkelpop festival in Belgium. Later that year they released their debut selftitled album which received four star reviews and lead them to stages all over Belgium and The Netherlands. Beyond Repair, the first single of the album got airplay in both countries and the video for the song has over 165k views. Some more singles followed, a spot on the main stage of Pukkelpop 2011 and an invitation to play the Eurosonic festival.

And then the band started working on their second album Roslyn, which was released in february 2014. Roslyn was produced by Rudolf De Borst, frontman of The Datsuns, and was recorded at the Svenska Grammofon Studion in Sweden on the Neve mixing desk that once was the heart and soul of Queen’s studio in Montreux, and was used by Jimmy Page to steer Zeppelin towards its ‘Coda’. First single Girl's Gonna Break immediately received heavy rotation on Belgian national radio and the band presented the new songs live to a sold out AB club in Brussels. More sold out shows followed and the second single Working Overtime became Hotshot on Studio Brussel, making it the most played single of the moment. In the meanwhile Roslyn went to number 5 in the Belgian charts and was praised by Belgian and Dutch Press for it's strong songs and musicianship. These next few months The Sore Losers will be touring the clubs and festivals in Belgium and The Netherlands and for the first time they will be embarking Germany, Switzerland and Austria to support Triggerfinger.

The Sore Losers will take you back to the garage where music is loud, brutal and exciting, but most of all fun. There’s rock and there’s roll and this Belgian motley crew knows how to handle both. With a wide range of emotions on display they find themselves balancing on the fine line between kiss on the cheeck and pinch in the ass. From Petty to Zeppelin, from Wilco to The Raconteurs these losers go for the win and blend it all in. It’s beautifull, but ugly enough and it’s yours to discover. Go give ‘m a listen, your win.