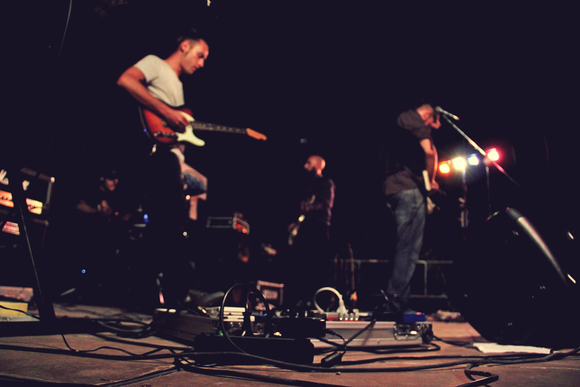 The band was formed by Enrico Tiberi.

In 2013, he shuts himself for a couple of months in his studio, 1 album and 3 eps see life and then he needs to find some great musicians to bring it all live: Alessandro Vagnoni and Manuel Coccia.
The three members find their alchemy together after years of touring europe, russia, america.
The sound of the band has been described as rock, as post-progressive, as psychedelic, beatleish, pink floydian... we just call it The Shell Collector.

2012 – Months in a studio.
A telecaster, synths, piano.
Enrico shuts himself into the recording room to make an album, influenced by the sound of the golden age rock and modern electronica.
The words which come out into the lyrics draw pictures of contemporary paradoxes and absurd ways of life.
Instead of an album, more than 20 songs take life and they are going to form an LP + 3 Eps.
The whole artwork concept is in the hands of Italian painter and artist Francesco Farneselli.

In the meantime, The Shell Collector goes live thanks to great friends and musicians Alessandro ‘Urmuz’ Vagnoni at the drums (Infernal Poetry, Dark Lunacy, Tapewhore), Manuel Coccia at the bass (KmFromMyIlls, Resurrecturis), and Alessandro Infusini at the guitars (Infernal Poetry), who join the band.
The first gigs are as a support act to Umberto Palazzo, Edenshade, Design, Soviet Soviet, Iori’s Eyes.
During 2012 comes out Design’s single “OPOV“ with Enrico on guest vocals and in 2013 the first two small unplugged gigs in London.