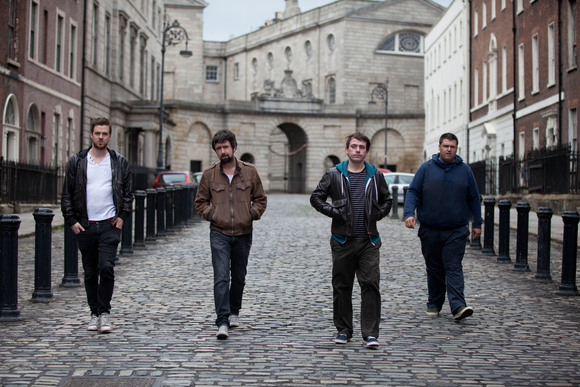 Fresh new sound rising from the streets of Dublin, on a mission to bring it to the world..

The Rattling Kind – Biography
A fresh new sound rising from the streets of Dublin, The Rattling Kind aim to put their modern indie-
rock twist on folk and traditional music. Drawing heavy influence from Irish ballad heroes like The
Dubliners, listeners encounter a daring brand of energetic folk rock, rooted firmly by a sociopolitical
consciousness.

Battle-hardened and well cultivated, The Rattling Kind hit Ashtown Recording Studios in the summer
of 2013 aiming to capture and truly encapsulate their on-stage dynamism. The resultant five tracks,
mastered by Aidan Foley of Masterlabs, became their debut EP "Rise Up".

The band has recently played tracks from the EP on radio shows like Phantom105.2’s “Breakfast Show”
and 4fm’s “Guaranteed Irish”. Two of these tracks, “All Around The Town” and Dubliners cover
“The Mero”, will feature on the International broadcast and Worldwide DVD release of the fourth series
of hit RTE crime drama “Love/Hate”.

Making their own television debut on RTE's "The Saturday Night Show", the lads produced a fine
performance of "All Around The Town", which saw it climb to No.2 in the Ireland iTunes
Singer Songwriter chart. Their debut EP "Rise Up" would climb to number 16 in the Ireland’s
iTunes Album chart.

In the Summer of 2012 the band recorded two tracks for a compilation CD released by Near FM
entitled "Near Musical Express" helping them launch the new record label Near Records. The self-
produced music video for their song "All Around The Town" has received some critical claim and was
recently screened at Dublin's Underground Film Festival.

The band has perfected their craft by playing to audiences across the city and its surrounding areas.
Live shows in The Grand Social, The Mercantile, Whelans and even a headlined MCD gig in Academy 2
have seen The Rattling Kind become well renowned for their increasingly explosive live performances.
Fluid drumming and driving bass are complemented consummately by incisive lead guitar playing,
A twinkling banjo, rousing keys and spirited harmonica, all of which provide the platform for a unique
and passionate voice to belt heartfelt lyrics to the heavens above.

Liasing closely with legendary Irish scribes Pete St.John
("The Fields of Athenry" & "Dublin In The Rare Ould Times") and
Wally Page (regarded by Christy Moore as “one of Ireland’s greatest songwriters”),
the band harbour a great respect for the music of times gone by, acknowledging and appreciating
the power of quality songwriting.

Hard-working and honest, The Rattling Kind hope you enjoy their music.
"Rise Up" is available now on iTunes.