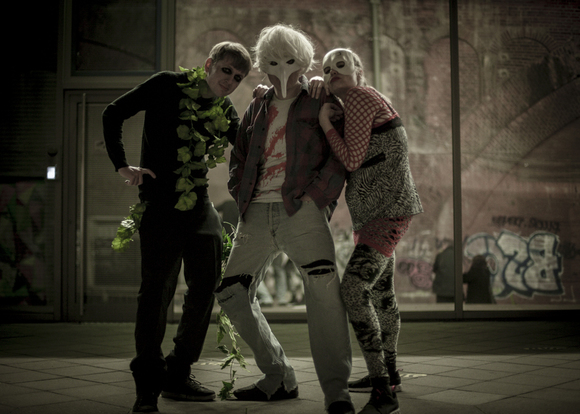 Our mother is King - Our father is Kong King Kong was fed up.

All this puking, every stairway was a Mt. Everest, and with this big belly he couldn't even scratch his knee... Though he carried his little 3-headed baby for only 4 weeks, he decided to come to an end with his pregnancy: King Kong gave birth to The Polymonsters!! Unpredictively this great good-hearted hairy father birthed a winner: The newborn Polymonsters won the Eurotrashvision Contest 2010! And started off their monster lifetime..

The Polymonsters are a theatrical electro disco punk band from Berlin, Germany. Since 2010 they combine various styles and personalities to some monster's sounds.

Just four weeks after The Polymonsters met for the first time, they went on stage at the King Kong Club, Berlin, and thereby won the Euro Trash Vision Contest.

Their first demo EP was recorded and produced by Christian Menzel at Loft Studios, Berlin.

Their second demo EP was produced and mixed by Niko Sieveking at Loktown Studios, Hamburg.