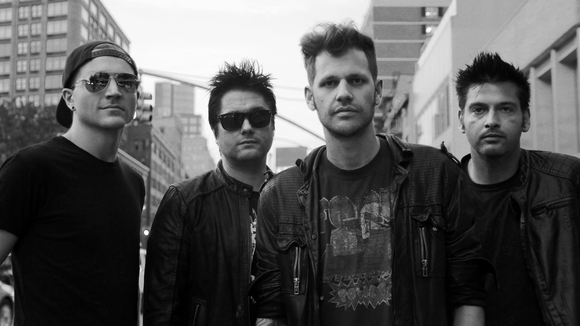 THE KILLING FLOOR combines the best of British and American rock music and delivers an electrifying blend of, alternative, rock, pop, punk and grunge.

With a blistering live show The Killing Floor draws together raw visceral power, with impassioned melody and songwriting, which has earned them comparisons to acts like Queens of The Stone Age, Muse, Led Zeppelin, Foo Fighters and Nirvana.

With members hailing from both sides of the Atlantic, the band came together when brothers Mark and Oliver Alberici from London, had a chance meeting with Marco Argiro at Hendrix’s Electric Lady Studios in NYC where they had all been working with hit producer Mark Plati (David Bowie, Cure) on separate projects at the time. Recognizing they shared not only a producer but many of the same influences, ideas and attitudes to music, they began writing and recording together and after taking the name The Killing Floor from the Howlin Wolf song, hit the road with their new material, quickly gathering fans and becoming known as one of the best new live acts.

The Killing Floor released their debut self-titled album in 2011 which the press described as "an enticing record with mass appeal”, “proficient songwriting”, and an “infectious quality”. The song 'Star Baby' was chosen as the album’s first single, and the band shot their first music video with legendary Hollywood director Joel Schumacher, some of who's film credits include: The Lost Boys, Batman Forever, A Time to Kill, and Flatliners. The song was featured in MTV programs Road Rules Challenge, The Real World and Best Ink, and received heavy rotation on US radio. In support of this, TKF toured throughout the USA, Canada, UK and Europe, taking in events such as CMJ, SXSW, CBGB Festival, Liverpool Sound City, The Great Escape, and Donnington’s Download Festival.

The band spent much of last year back in the studios of Brighton England, Nashville and NYC, writing and recording and late 2014 saw the release of ‘Corruption Capital’ the first single from their second album. The song received rave reviews and extensive rotation on US national commercial rock radio playlists including WBOS, KNDD, KXXR, KNRK and WRKZ to name a few. Pure Volume described the single as "a seamless blend of melody and political rock" and the video was premiered on Guitar World Magazine. The video also gained heavy rotation and was played in all of Journeys shoe stores throughout the USA.

The band just recently returned from Indie Week Canada where they won "1st place best band" and are now planning a number of Single/Ep releases from the forthcoming album supported with live dates at SXSW 2016 and Indie Week Europe held in Manchester UK in May 2016. More shows and dates to be announced shortly.