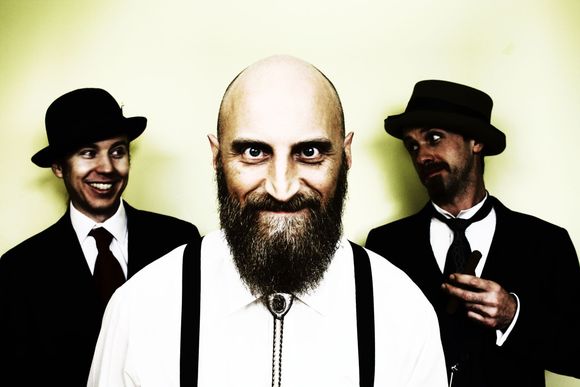 Good things come in threes or at least that’s what they would have us believe. For sure the gruesome threesome that is the John Conneely Trio (JCT) lend credence to that belief. Formed as a distraction from the rigours of daily life on the northern fringe of Europe the JCT began life in the box room of a semi-detached in Galways sprawling suburbs. With a smallish drum kit and an even smaller laptop the JCT began to record some songs in the style of the 30′ and 40′s. The memories (via YouTube) of Django fresh in our minds we started to inter-weave the Le Pompe rhythms into our self penned musical inventions.

To this end, having Mark Sullivan on board was a major boon due to the fact that, for the past 4 years he has lived and breathed Django’s music and is something of a swing aficionado. Mark has played many styles in his young life, starting (almost inevitably ) with hard core thrash metal (yes I have seen the video evidence) and moving through the genres learning as much as he could and bringing it all with him to his present day incarnation as a guitar wizard who, when he’s not sleeping, is playing/practicing his craft. He has played with some of the most accomplished musicians in the country (Frank Kilkelly, Robin Nolan, Ian Date) and has the dubious distinction of looking like Lusmagh’s answer to Derek Trucks.

Drummer Ciarán Kelly is more of a mystery man. Even though he was born sometime in the 1970′s this quiet and unassuming individual would lead you to believe he is a man out of time. His wardrobe alone seems to comprise of clothing that last saw use during the first world war and his collection of hats is nothing short of miraculous in the sense that it is hard to believe they could have come from anywhere but a museum (ahem, say nothing).Then there’s the drum collection. Ciarán spends his free time trawling the world wide web procuring items of a percussional nature and then breathing new life into them. His preferred mode of transport is a vintage VW camper and even his dogs have a touch of the “Enid Blighton” about them. Most importantly though is Ciarán’s approach to drumming. His style of playing harks back to the days of Buddy Rich & Gene Krupa he is so hands on that some people feel slightly violated (in the nicest possible way of course) after hearing him perform.

As for myself I am a relative new comer to this genre of music. Whilst I have been listening to Billie Holiday, Nina Simone, Benny Goodman and the like for many years it is only in the 3 years that I began to perform my own interpretations of the songs of these super stars with any degree of proficiency. I have been writing and recording original music since I was a tender 16 years old and like Mr Sullivan I have run the gauntlet of Rock, Grunge and Metal. However as the lines on my face grow more visible I find myself drawn to gentle but compelling sounds of Swing and Jazz and the Blues. The music I write for the JCT is not strictly Swing however but more of an amalgamation of my style and the style of these great performers. We do not endeavour to recreate that which has already been done with such class, we simply want to incorporate it into our own creations and try to plumb the depths of Jazz and the Blues in modern day Ireland.