The History of Gunpowder 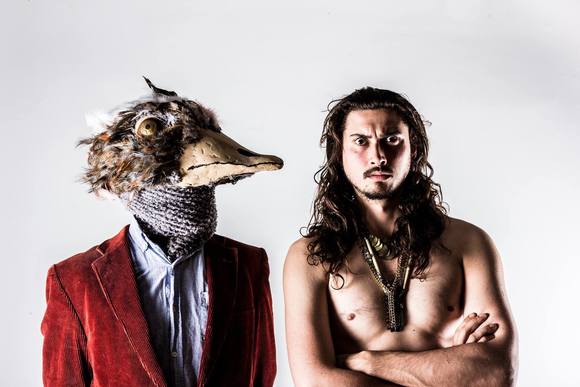 The History of Gunpowder is a five-piece, independent and experimental band based in Montreal.

Boasting three studio albums, the group is currently completing their fourth LP, The Epileptic, building on leader Alex Morison’s writing while in India, Vancouver and Montreal. Drawing inspiration from blues, soul, jazz, funk and punk, the music exists as an ordered chaos; elevated by the band’s affiliation with Montreal’s finest burlesque dancers and performance artists, who often perform original numbers alongside the band. The live performances are unpredictable, highly visual affairs that blend genres and unconventional compositional styles, making the History of Gunpowder a thrilling alternative to the typical live music experience.To support their upcoming full length, they are departing on a European and cross-Canada tour.

The music of The History is couched in traditional blues and played with traditional but highly affected instruments. The band’s extensive use of loops and drones is contrasted by heavy, swinging passages that carry long and winding melodies. Drawing inspiration from blues, soul, jazz, funk and punk, this group emerges as a delicate balance between order and chaos.

Stained Glass, Rye, and Wax; the third studio album released by the band, was the culmination of a move from the experimentation and jazz musings of the first album, Slowness, to a heavier, more dissonant, and boisterous sound. John Julius, writing for Beatroute, had this to say: “After years of depreciating in traditional beauty and appreciating in aesthetic roughness, he has finally hit the point of no return and it is truly glorious.” In 2017, The History was voted #6 in the Top Ten Best Bands in Montreal by Cult Magazine. Sharing the category with good company: Arcade Fire and Half Moon Run.

What’s most intriguing about this album is the process that brought it to life. While travelling India, Morison rented a small, bare room and began writing. He emerged after a month and travelled to Kerala, where he found a group of Bollywood string players and began recording. The Kerala sessions were fruitful and Alex returned to Canada, packing a hard drive loaded with the strange and complex string arrangements that would instruct the rest of the album. More than eighteen musicians showed up at the 2015-2016 sessions, laying track on top of track, building the songs into monstrous, melody-driven, orchestral cacophonies. During this time Alex was managing The History’s busy gigging schedule and already writing for The Epileptic. He often struggled with idea that he’d overreached; that the songs would be too daunting and ultimately unworkable. But with hundreds of hours spent editing, Morison slowly and deliberately worked the album down and prepared for mastering. For mixing, the album was sent to Chris “Hollywood” Holmes who sculpted the work into its final form. The result is an album described by Bucketlist reviews as, “8.7/10… music that could travel both on a modern stealth bomber or in a horse-drawn carriage…to create something I’ve yet to hear until now.” And by Ride the Tempo as being “conventional rock-blues...but it is wrapped up tight in a very peculiar package of jazz, funk, and odd noises.”

Recording for the fourth album continues in the same episodic way as Stained Glass, but its scope, its length, and its use of experimentation will be over and above its predecessor. Meanwhile, the band’s live performances are also becoming untameable monsters in their own right. Having integrated themselves in Montreal’s thriving burlesque scene, the History’s shows now often feature the city’s finest burlesque artists and puppeteers performing to ever ambitious compositions.

Other projects in the works are a Found Sound series where compositions are recorded over live performances by leading Canadian buskers across the nation, music videos by some of Canada’s leading experimental videographers, and a series of live videos featuring original compositions recorded with a string quartet in Morison’s loft entitled The Chanting Cage Sessions. All said, The History of Gunpowder is an emerging band on the rise; a group that is busy and ambitious, pleased to be the rising cream of an incredibly productive city and welcoming of the international opportunities coming their way.

"For an album that was written in India and recorded between Kerala, Vancouver, and Montreal, Stained Glass, Rye, and Wax feels precise, consistent, and succinct. The band and recording crew brought their A-game in every sense, delivering one of the most exciting records of the year and in the process reminding us that there’s still a bit of fire in our bellies, if we can be bothered to look for it."

"Frontman Alex Morison’s voice has become something both horrifying and enthralling. For a man under fifty to have beaten his throat into such a state inspires strong awe, mild concern, and just a hint of jealousy – his suffering voice conveys disdain brilliantly. The images he breathes carry connotations of misery, vice, trickery, and guilt posing as aggression; the images he breathes very nearly fit the “whiskey band” stereotype but betray a deeper poeticism, inspired by all the writers you claim to love but secretly find impenetrable. After years of depreciating in traditional beauty and appreciating in aesthetic roughness, he has finally hit the point of no return and it is truly glorious."

8.7/10 - "Circus rock- if acrobats needed a soundtrack as they theatrically hurried up ladders and glided through the air, I’d say Stained Glass, Rye and Wax would be a great place to start. The History of Gunpowder rises from Montreal with music that could travel both on a modern stealth bomber or in a horse-drawn carriage…to create something I’ve yet to hear until now.”

"The music on Stained Glass, Rye and Wax... tends to create a cacophony of sound. Yet, from the mayhem, Morison has somehow managed to force a structure on the noise, resulting in music that pushes the boundaries of genre and musical composition."

"There may be a conventional rock-blues number at the heart of “The Ostrich” but it is wrapped up tight in a very peculiar package of jazz, funk, and odd noises."

"This is a band with a reputation for explosive psychedelia and freaky theatrics, but while there were no surprise drop-ins from burlesque artists at this particular gig, guitarist and vocalist Alex James Morison brought plenty of thunder with his own strings, howls, and showmanship. With the throat of Nick Cave and the wardrobe of a zoot suit scarecrow, Morison stalks the stage like he’s possessed by his guitar, wandering feverishly through the many twists and turns of songs like the dynamic highlight and set-closer 'Buenos Aires'."

"the whole experience felt like more of a late-night party than a performance. That seems perfectly appropriate for a band that looks like they have as much fun playing with each other as they do playing for the people. The same goes twice as much for an audience that came to have a good time and got a chance to play with fire."

"I spent the evening at Divan Orange listening to quite the articulate, tight, and dynamic performance. Their energy did not waiver as the band moved as a solid unit through their music, making for a perfect balance between technical skill and creativity."

"The members of The History of Gunpowder aren’t afraid to take risks. Not only is their music a mix of swamp pirate blues and growling vocals, but they have an ostrich as their mascot."

"The History of Gunpowder’s setup also features some searing fiddlework. And bird puppets. And also burlesque dancing. It’s all part of frontman Alex James Morison’s apparent mission to craft an experience for showgoers like no other, putting everything he has in him up on the stage before burning it all down."

"Using a throat that would make Tom Waits and Nick Cave jealous, Morison kicked off the show with a stomp-and-howl number that made me scribble two words in a notebook: “holy shit”. A 6-piece lineup featuring drums, guitar, fiddle, synth, and upright bass, The History of Gunpowder plays a genre of music that might be described as “roots-rock”, but only if those roots reach down into Hell. Face-melting and head-banging, Gunpowder’s controlled chaos hypnotizes crowds into a sludgy dancing fever, like a hoedown at the Apocalypse."