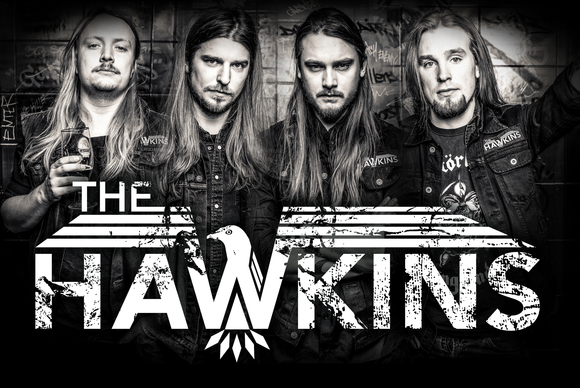 This young, energetic, hard rocking band from Arboga, Sweden, has taken its inspiration from the 60’s and 70’s and created a unique blend, where the technical dexterity never overshadows the songs and melodies.

The songs on the debut album ”Ain’t Rock n Roll” – released on the 6th of October 2017 on Gain/Sony Music – confirmed their position as one of Sweden’s up and coming hard rock bands. The first single – the anti-racist anthem – “Fuck You All I’m Outta Here” was released on the 12th of May and was followed by “Rat Race”, “Shaking Ground” and “Perfect Son”. The album has received praise from rock magazines all over Europe and in 2018 the focus is set on playing abroad.

But no matter how great they sound on recordings, The Hawkins are foremost a live act. They rock hard, or to be more direct/blunt about it: they kick ass! They have played _a lot of shows_, ranging from the classic Swedish clubs to some of the biggest festivals, such as Sweden Rock, Peace & Love and Metallsvenskan. They have been the support act to bands like Hardcore Superstar, Freak Kitchen, Imperial State Electric, Mustasch, Dan Reed Network, Lillasyster, Heavy Tiger and Wolf to name but a few. This has enabled them to become a great live act, and to this date there hasn’t been a single promoter, club or festival that doesn’t want to book them again. Late 2016 they did a 10 date Russian tour that took them 3.200 kilometres from the far east Yekaterinburg, through some never-heard of Tundra countryside cities, to end it all in a blast in Moscow and St Petersburg.