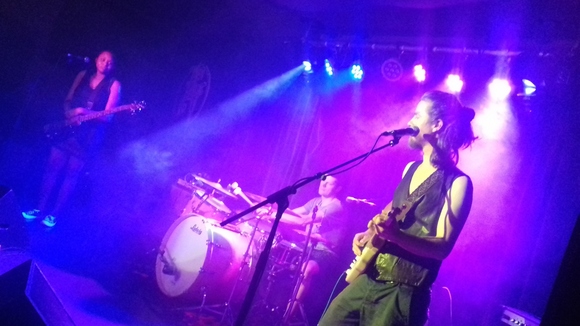 The Giving Style is a London-based, Americana-infused indie band.

‘Blue Hair Special’ is the lead track on their forthcoming four-track EP entitled ‘Monster Tracks for Bread Lovers’. The Giving Style is the brainchild of singer/guitarist Justin Sicile. Sicile is joined by Tasha Caesar (backing vocals, synths, bass, percussions), Dominic Power (drums) with special appearances by Becky Morrison (violin). Following the intervention of an acclaimed film and music producer Adam Skinner, their first four tracks are polishing up to the next thing you'll hear on the radio. The lyrics are twisting and often comical. The guitar riffs are an electric roar, like a punch up between folk and punk. Add dirty, 80's inspired electronics and keys, and a funky rhythm section and we've arrived at The Giving Style.
American lead singer and guitarist Justin Sicile from New York grew up in a French-speaking household listening to the Beatles, Stevie Wonder, The Doors, Fleetwood Mac, and The Byrds. Sly and the Family Stone, Tribe Called Quest, and The Zombies would later have an influence on Sicile’s song-writing. Sicile, along with illustrator/animator Stella Salumaa, create all the artwork for the band.