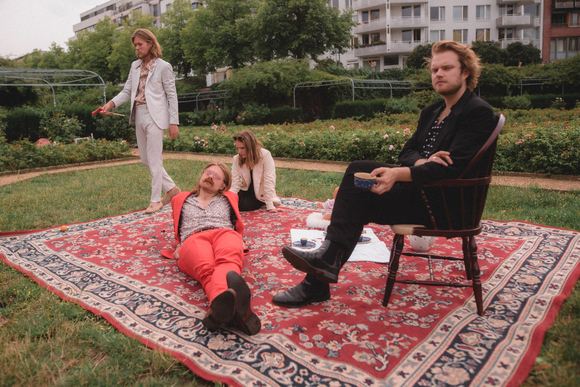 The Flavians - On the Radio live at Cassiopeia, Berlin

After sharing a bunk in one of Berlin’s numerous hostels for several weeks, Swedish Joakim Jägerhult (drums) and Liam Blomqvist (vocals & guitar) began to share ideas and develop what was soon to become their next project, The Flavians.

With the later addition of Czech Republic's Anna Vaverková (vocals & keys) and Thomas Wills (vocals & bass) from the UK, the band began to write together. Drawing inspiration from bands such as The Beatles, Grateful Dead, and The Beach Boys, they set out to join the warm, nostalgic sounds of the 60s with the frantic, hedonistic energy of Berlin.

With vocal harmonies from a blend of three diverse voices, psychedelic guitar textures and lyrics discussing themes such as destitution and alienation, they walk the tightrope between the surreal and the mundane while staying grounded and focused on writing accessible, melodic, yet experimental songs.
​
As expressed by Sleek Magazine, Germany: ‘After all of the hard drugs and partying (or for some of us, an early evening milchkaffee before a quick dance to someone spinning Ariel Pink at Schokoladen, followed by going straight to bed), we need some wistful & light folk-pop to soothe the things that paracetamol cannot.'

The band have been busy playing packed out shows in their adoptive hometown. The summer of 2019 the band started out by supporting Catfish and the Bottlemen at a sold out Huxley's Neue Welt in Berlin followed by two shows at Glastonbury Festival and four shows at Germanys renowned, Reeperbahn Festival which lead them to a German tour with British Ten Tonnes. The Flavians started 2020 by releasing their debut album Ordinary People in an Ordinary World on the 31st of January which they celebrated by playing yet another show with Catfish and the Bottlemen, this time at a sold out Live Music Hall in Cologne.