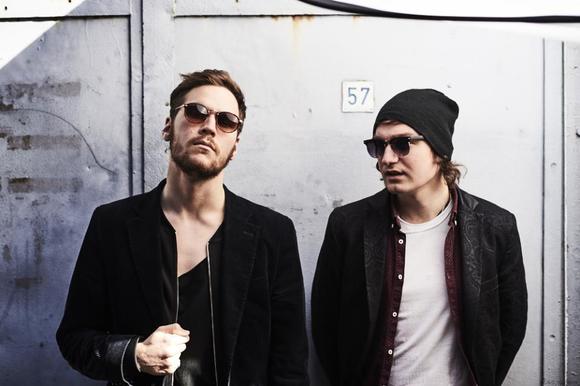 That's the name of the upcoming album of the Berlinois pop electronic duo, The Emma Project. The Emma Project have already released two EP's since they founded the project in 2012. The title of their debut album gives the audience space to think about the previous albums. It seems that the singer and songwriter Fabrice and the DJ and pianist Michel have experienced a lot over the past few years. The album creates a feeling of love, life and freedom, dance, movement, ecstasy, peace, silence, conscience and melancholy. Years, shares a time where we see each other change. Everyone who has seen The Emma Project grow will understand the developments that the two musicians have gone through – from the tiniest rehearsals in Berlin to the Columbiahalle Berlin.

Fabrice and Michel, both in the mid-twentes, have always had a love for building musical bridges and they have composed various tracks both with four-to-the-foor beats and fragile gentle piano pieces. Imagine if one could pause an Emma Project song – hopping from classical instruments and arrangements to electronic sounds and freezing mid-hop, in this moment you can discover where the sound of Years came
from. From the recording studio in Berlin to the recording studio in Paris, if you'd just hold in the middle of nowhere, nature, silence, and you'd just start recording without listening to anything else, just like the band did last year. This was the inital beginning of the debut album when the Band was on tour through Europe last year, surrounded by natons, cultures, noise, silence and unfltered life in it's direct and true beauty.

The outcome is a sound that seems to levitate above the older songs of the band. The sound varies from clear and honest instrumental and synthetc soundscapes, and to contrastng synth walls, that frame Fabrice' voice beautfully. Stll, Michel and Fabrice seem to have never allowed themselves clearer to their original instruments before. Fabrice' voice, conducted by the piano and the guitar, gives the listener a certain guidance through the album, processing and presentng emotons with a dynamic like it can only originate from real emotons. Stll they have a walk-over creatng intmate atmospheres while adding
soundscapes and deepness to the sound that at tmes lead to monumental and epic synth hymns with Fabrice's voice stll being close and immediate to our ears. Years is an album about vicinity and vastness. 'We aimed to reproduce life with all its complicated facets and banality without any filtering' says the singer. 'Our vision of Years is to process our attudes of life as young people without thinking too much about it' adds Michel. Without a shadow of a doubt, that attude of life is a mood in between happiness, joie de vivre, friendship and love – sometmes with melancholic moments but stll dominated by a positve vision of the past and the future. Like the two experience life.

Since The Emma Project had started to make music about four years ago, change has been an almost constant element in their career. Afer the producton of their frst EP they were joined by a bassist and the drummer Florian – for the European tour in 2015 they performed their music on stage with one more guitarist, countng fve live members. With their EP 'Chromatc' (2014) they have been awarded the Blacksheep Natonal Award 2015, they have played more than a hundred concerts at festvals, TV- and radio shows and clubs. Time fies, years come and pass. And with this new album the live crew in now three members – Fabrice, Michel and Florian on stage henceforth. Together with Florian and thanks to the support of their sponsoring partner Canton, their producer Mathis Richter-Reichhelm and the music producton company Mahoni they have managed to create a whole new concept for their live performance while recording the LP. Fabrice and Michel call this a 'reducton of the composed voices and instruments
while increasing and spreading the sound with efects, sounds and arrangements'.

Nobody knows what life has in stall for us. With Years the three musicians have refected on the past so now they are ready for the future. Establishing their sound on one side but also contnuing to grow with the lyrics. Ready to conquer the world and to travel wherever the Years will bring them – with happiness about the past and antcipaton for what's next in store. Kick-of: Sat, 4th of June, 2016 – Columbiahalle Berlin and the release of their debut album