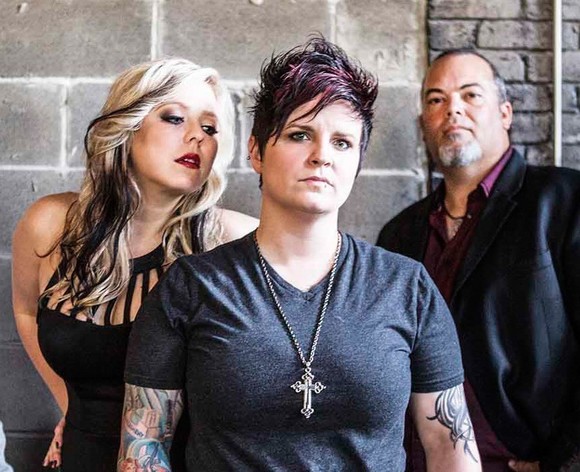 Recording Artists, The Band Hennessy is a Texas alternative rock band that brings a powerhouse original sound and performance.

They’ve opened for numerous chart-topping bands such as Dead Sara, Hinder and FramingHanley, Lita Ford, Saving Abel and Hunter Valentine. Headlined the 94.5 Texas Buzz show and just recently performed at The Bayou Music Center in Houston, Texas. In Oct 2017 they released their EP "So Much For Love" on I-tunes, Amazon and others. The Band Hennessy has already developed a substantial local and state-wide following.The Band Hennessy also offers an ACOUSTIC SHOW version of the band for smaller venues.
Lead Vocalist, Ashley Hennessy, joined forces with Christian Weigand in 2013. They quickly cultivated their own original sound of Alternative Rock music, with a heavy, driving bass line, resonating lead guitar, and intricate drum patterns.. in which each member’s influences played a major part. Ashley quickly built a name for herself within the Houston, TX area by competing in multiple singing competitions, such as Houston Pride Superstar and Bay Area Houston Idol… in which she earned the titles of in 2011 and 2014. Her musical influences are broad: Michael Jackson, Queen, Journey, Melissa Etheridge, Amy Winehouse, and her personal favorite… Elvis “The King” Presley.
Lead Vocalist, Heather Miller, recently crowned Bay Area Houston Idol 2015, has been a staple in the Houston music scene for over 10 years. With her unique vocals, intense and commanding stage presence, and looks that could kill… she brought a breath of fresh air when she joined The Band Hennessy in 2014. She captured the hearts of many when she was heard singing “Me & Bobby McGee” at an acoustic show in their hometown, and she has been a force to reckon with from day one. She credits her musical influences to Amy Lee of Evanescence, Jewel, Heart, Michael Jackson, and Reba McIntyre. Once you see your first live show, you will understand why many are captivated by these two powerful front-women. Their chemistry while performing on stage only showcases their distinctive sound further when their harmonies fuse together… showcasing one of the only bands today that feature two leading ladies.
Lead singer and guitar player, Christian Weigand has lead and contributed to numerous blues and funk bands in the Houston area since the early nineties. Born and raised in Houston, Christian has been a regular fixture on the local music scene for roughly 20 years.
He has performed in such groups as “New Relics”, “Nightwatch”, “One Accord”, “Brotherhood” as well as the award-winning groups, “Rumblefish” and “Pearl Murray” and has shared a stage with the likes of Randy Travis and Joe James. He is an accomplished funk-blues guitar-player, regularly playing with Ezra Charles and the Works as a back-up guitarist since 2004.
Drummer, Giovanni Capella has played with bands such as The Hunger, The Playboys, and The All-Stars. Giovanni has been drumming and teaching drums for over 20 years. He has traveled the world on tour and has brought his dynamic drum sound and technique to The Band Hennessy and has contributed greatly to the new sound.