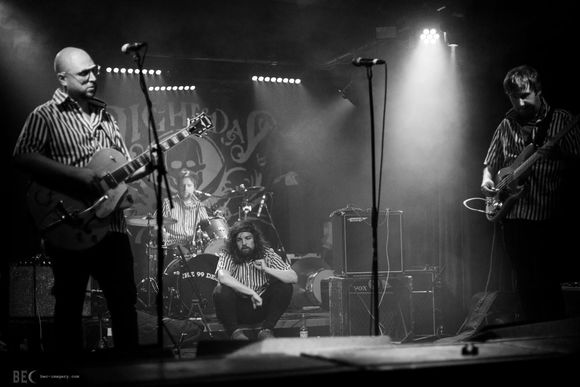 The resulting mixture quickly yielded finished songs and after an outing as a duo these quickly grew into bigger and more complex full-band arrangements. Close friends Paul Fetherstone and Craig Trickett were called for on bass and drums (with Craig uprooting from London to be involved!) and The 99 Degree line-up complete.

Staying deliberately underground and combining select support slots with some of the alternative scene's best names (The Fall, King Khan & BBQ, The Shivas, Mystic Braves, Kid Congo, Death Valley Girls, The Schizophonics) with a select few DIY headline events thrown by the band and friends, live comparisons were quickly drawn with the likes of Fat White Family, The Growlers, The Cramps, Black Lips and The Allah Las but with something quickly becoming identified as their own and increasingly labelled as "Black Surf".

2016's self-funded demo release Dead Or Alive drew acclaim from as far afield as France purely by word of mouth before May 2017 saw the release of the full debut EP 'Boot Hill Surf Club', again self-funded, to further acclaim and excited reviews stemming from the packed out DIY launch night in Manchester attended by those in the know within the dripping walls of Manchester's The Castle.

After a late showing 2017 festival-wise at Rec Rocks’s Tim Peaks stage, 2018 could be the year of The 99 Degree's Black Surf. With a new release written and penciled in for later in the year, word is creeping further afield out of Manchester’s basement venues and a number of opportunities are on the horizon for this truly original mutant surf band.

The 99 Degree's Boot Hill Surf Club EP is available via Spotify, Apple Music, Google Play, Amazon and all other good download sites as well as free streaming from Soundcloud.

"Boot Hill Surf Club would be worth buying for the guitar introductions on the first three tracks alone. Add in the crazy danceable rhythms and pure, sexy Mexicana of some of the tracks and you have a great addition to the genre and a new twist to a retro style of music" - Louder Than War

"Boot Hill Surf Club is the work of a group who plough their own furrow. It would be easy to knock out an EP of straight-up garage punk for these guys but that isn't their style. They play with formats and styles, fitting the subject matter to a particular approach, and by god, does it work. There is humour, drama and spittle in this EP and I, for one, wanna hear more!" - Dayz Of Purple And Orange

"The 99 Degree are out there on their own, there are obvious comparisons to bands, but they have their own unique sound that possess the primitive spirit of rock n roll and garage, whilst at the same time embodying the fuck you attitude of punk. Something very special seems to be emerging from the primeval basements and rehearsal spaces of Manchester and The 99 Degree are amongst the most original of the denizens that occupy the alternative scene in Manchester" The Punk Site

"The sound is mad, raw and random but they have something very charming and despite the references it sounds fresh and original. They’re certainly not following any particularly recognisable path – and you know what? I quite like that. I get the impression they could nail it one night and completely fall apart another. I recommend you see them and make your own mind up – there’s definitely some method in their madness, I’m just not sure what it is!" - Louder Than War

"The Northern Quarter’s best kept secret are local lads The 99 Degree they break out into psych-enthused spaghetti western surf rock; ‘Dead or Alive’. A fantastic track all round with its moody guitar riff, drawled vocals and throbbing rhythm section – the crowd lap it up. Another key track which channels the likes of the Allah-Lahs and will always turn heads comes in ‘Bed of Bones’. Definitely one to watch these guys, the possibilities are intriguing." - Silent Radio