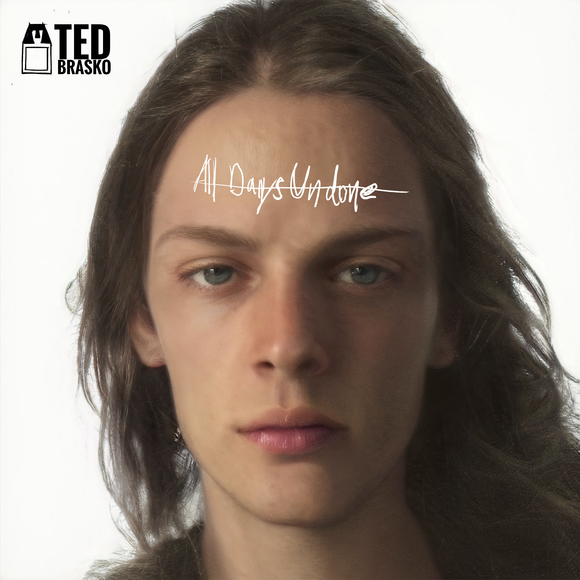 „a raw diamond that doesn‘t need to be polished“ Ted Brasko has announced the release of his debut album „All Days Undone“.

Starting as a sub project of the Ted Brasko universe, he selected 11 tracks of the productive stream of the last two years, and unify them under the title concept of „All Days Undone“.

„a feeling of a youth, the longing for a new beginning“

„All Days Undone“ is a feeling of a youth, it is postpost everything, in a totally connected world, and an overload of information, the attempt of numbness and it‘s way out of it, through presence and love.
It is spending every night at the playgroud around the corner, forgetting your phone, being alive in this crazy spaceship of life.

„there is gems and bullshit in everything we do“

Inspired by the approach of many trap artists not to overthink their lyrics and to put flow before judgement, he started to experiment with singing in fantasy language, or trying to finish songs within a few hours without revision.
There is not really a point of overthinking what we do, to present ourselves in the most perfect and flawless way. This album is about forgetting this attempt and to just be whatever you feel like at the moment in time.
Starting from the 20th April 2021, every 2 weeks a single from the album will be released with a music video.
To create these videos Ted Brasko collaborated with 11 different video artists, as well as countless actors, performers, dancers, and puppeteers.

„Do not get trapped in history, be present, be you.
All days undone!“

Ted Brasko is more than just a musician. He is the label. During the release phase of his first album he starred the short movie „Who is Ted Brasko“ (45min), he developed a Ted Brasko Cocktail and created an underwear collection with the upcoming brand Tamarrotigro, which are going to be released over the course of the year.
Two further musical releases are planned for the year 2021. Including the Pop project „Lighthearted“ in June 2021 and the Electronica Duo „Zei and Brasko“ with their debut EP „Distraction“.

As a performing artist Ted Brasko is always trying to redefine the possibilities of a live show and to find new ways to shape the audiences experience including different type of media, storytelling, theatre, musical, and performance.
The second album, which is scheduled for April 2022, will be a representation of this experience approach and will be structured like an audiobook, including poetry, storytelling, music from various genres and leading the listener through a Ted Brasko experience, as divers and colorful as life itself.

Ted Brasko is certainly an artistic force to be reckoned within the next decade. His constant and immense output of different types of media opens an almost endless universe to explore and to experience.

BIO
Ted Brasko is an adventurer, captain and artist. He is an extraordinary personality, in the attempt to walk through his life fearlessly and constantly reinventing himself. He has sailed around the world, founded a start-up company, held his breath for 5 minutes and sat on a park bench watching birds.
Ted Brasko is a fictional character and very real at the same time, he claims to be everything and to mirror the whole complexity of the human experience beyond categories of artistic fields or musical genres.
He plays various instruments, sings, raps, composes, dances, acts, writes poetry, he envisions and designs.
Human life is not linear and so isn‘t Ted Brasko.
He is not ashamed to cry or to laugh.
Overall his story is the story of overcoming all the bullshit with generosity and an open heart.