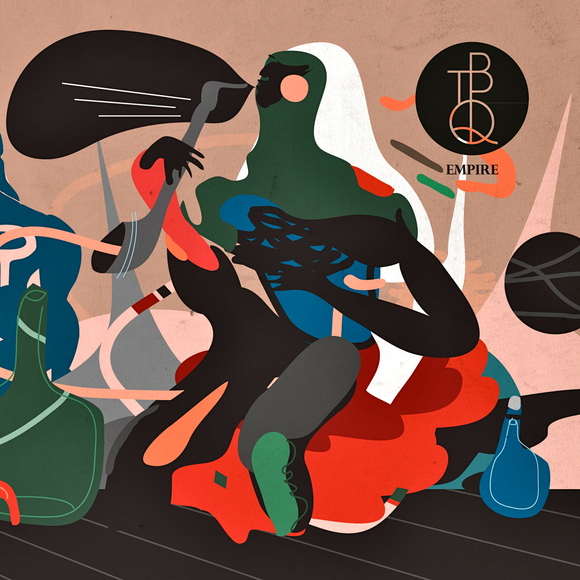 TB4Q "The desire for innovation as Miles Davis, as free as John Coltrane, as fast as Django Reinhardt and the anarchist versatility of Charles Mingus" Jazzism magazine Bio TB4Q It has been said about TB4Q that they are ‘a musical unit whose reach extends across several generic territories, encompassing everything from solid rock ‘n’ roll, moaning blues and lounge music to New Orleans funk and swinging jazz’.

This is very true. Deeply rooted in the traditional jazz- and blues-idiom, TB4Q is both authentic and non-conformistic at the same time.

Since the summer of 2000,...TB4Q has constantly proven to be a fertile ground for new perspectives on how to make good music. Every influence thinkable is welcomed as a new impulse and boundaries are challenges to break rather than limits that have to be dealt with. Creativity and growing in every kind of way is the motivation of TB4Q.
But wild ideas and ambition alone are not enough to make a good band. You’ll need good musicians too. TB4Q passed the tests on that point easily, regarding the comments in reviews of TB4Q shows and records. When OOR-magazine gets Coltrane-associations, Downbeat Magazine recognizes some Rashaan and Les McCann and All About Jazz takes Wes Montgomery as a reference point, there can’t be any doubt about the high standard of musicianship.
Over the years TB4Q has produced tons of shows and three full length records. The evolution within the band is strongly recognizable on the albums. On the first, The Congregation Sessions, there’s room for 50’s Rock’n’Roll, a Less McCann cover, some lounge, 60’s Jazz-Funk and a Coltrane-like instrumental ballad. For Sanctified, the second album dating from 2008, all songs were written by TB4Q and the horizon is even wider. Gloomy and dark on one hand, cheerful and happy on the other. Within ten songs the whole range is covered between Tom Waits moaning, Bossanova dance tunes and seventies blaxploitation funk. For both albums the critics were unanimous: very high quality, very eclectic and incredible how a five-piece band can do all these styles while still sounding as one and the same band. On the third and most recent album Empire, the search is still going on. This time there is a stronger focus on the compositions and extremes are touched, resulting in, again, a very diverse album but not as broad as the previous. The search has gone into deep instead of wide.
No one can tell where the music will take TB4Q for the next step. One will have to wait and find out!