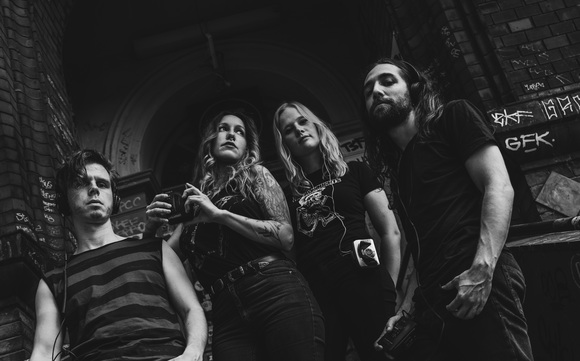 Tape Shapes are a four-piece German Stoner Rock/Grunge Band from Hamburg, formed in 2014.

The band combines 1990s-influenced-grunge-vibes with heavy rock guitar riffs, pounding bass lines and groovy stoner rhythms as the singer´s powerful vocals switches between hurtful shouting and catchy tunes. In the last years the Tape Shapes´ sound turned from a crunchy alternative style to a much more hypnotic and complex stoner arrangement. The result is an aggressive, pushing forward compilation of songs that surprises with dynamic melodies and hard breakdowns as you can hear on the new record “Overload” which is going to be published in spring 2020.
Tape Shapes´ first alternative style EP "Greetings from Barcelona" (2014) was created during a live session at Stone Box Studios in Barcelona and is still only available on tape. The two EPs "New Lies" (2016) and "Divine" (2017) followed. The latter resulted in two professional music videos in collaboration with Spirit Bear Film and Cocoon Cut.
The hanseatic musicians shared the stage with bands like STAKE (BEL), Samavayo (D), The Franklys (GB) and The Grand Astoria (RU) making themselves a place into the stoner rock scene as their influences collide to an unique music style that makes people dance and headbang.