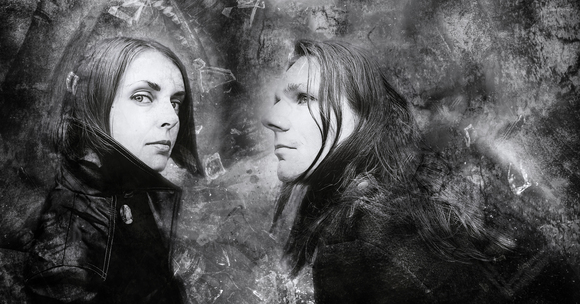 Their new album Glass which hit the top of the charts on Bandcamp tells Zhenia’s personal story as a multi-ethnic queer refugee and complex trauma survivor from a working-class background.

Their influences range from artists like Son Lux, Gesaffelstein, Fever Ray, Nick Cave & The Bad Seeds, My Dying Bride, to the ethnic music of the Ukrainian Carpathian Mountains and the films of Sergey Parajanov.
Originally formed in Kyiv, Ukraine, where both members resided they have been based in the UK since 2015. They have released five albums and have toured extensively all over Ukraine and UK. Their music has been played on BBC2, BBC3 and BBC6. Some significant performances include their two headline shows in Kyiv House of Artists in 2012 and 2013 to crowds of roughly 500 and a recent show at SWX (1100 capacity) in Bristol as the first support for DakhaBrakha on 11th September 2022.

‘Glass is a truly astounding, powerful and highly pertinent piece of work… The outfit fuses electronica and drone with industrial flourishes and beautifully dark songwriting… If it doesn’t get your blood pumping then you may as well check yourself into the crematorium… Over throbbing electronica and a relentless four-to-the-floor beat, tAngerinecAt delivers one of the most exciting pieces of music I’ve heard this year. It is, to use a technical term, an absolute banger.’ – Louder Than War
https://louderthanwar.com/tangerinecat-glass-album-review

"tAngerinecAt is breaking down barriers and the time-space continuum"
- Post-Punk.com
https://post-punk.com/experimental-post-punk-duo-tangerinecat-debut-video-house-of-shards