Sun and the Wolf 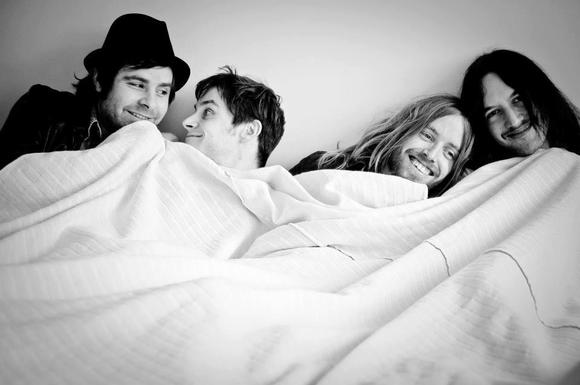 Explosive and overdriven by rhythm and blues, Sun and the Wolf create a wonderland soaked in psychedelia on their debut album ‘White Buffalo’.

With tales of heartbreak, debauchery and deceit echoing from a far away room, the reverb and guitar driven rock of this Berlin based four-piece shows a band soulful and dark in their delivery, live and on record...

Forming from the ashes of another life in New Zealand, Sun and the Wolf’s Brodie White, Peter Mangan and Mike Tweed relocated from Auckland to Berlin in late 2008.
They had left behind the comforts of home and a band they had formed at the age of 15. One that had carved it’s name upon the New Zealand rock’n’roll scene. Formerly known as The Have, these young New Zealander’s had experienced commercial radio and television success, three invitations to SXSW in Texas, a number of syncs on international EA sports video games and the experience of having their debut album produced by Barrett Jones who worked with Nirvana and
The Melvins.
But the debaucherous embrace of Berlin had been beckoning, and at the end of 2008 nothing seemed more exciting than the idea of relocating from Auckland and starting things a new. 2009 and 2010 was a shedding of skin for the displaced New Zealanders. It saw Sun and the Wolf morph not only from The Have in name but also in style. The raunchy riffery and breakneck pace of The Have’s garagerock and four to the floor rock’n’roll made way for the drone of slower paced psychedelia and more space for instrumental jamming. It felt as if the beautiful grime of their newly adopted city was seeping through the cracks of their skin and inspiring a darker more sinister collection of songs.
Happy with the sounds of this new material that they had demo-ed deep in the heart of the abandoned Tempelhof Airport, Sun and the Wolf begun to record ‘White Buffalo’ in the summer of 2010 at an underground bunker studio below the streets of East Berlin’s Prenzlauer Berg. Self-produced by and engineered by Frank Popp, the album grew as the band did, still a reasonably young commodity was this new incarnation of the former garage rock 5 piece. Upon completion the album was a snarling beast with anthemic jangling psych-numbers like ‘You’ and ‘J Billow’ while the dirgey lope of Oh My Lord and Crocodile slink into the back of your mind and burrow back out.
 
In the mean time Sun and The Wolf had busied themselves making a name in Berlin, playing support slots for the likes of Sleepy Sun, Titus Andronicus and The Datsuns, as well as embarking on German tours with heavy hitters such as White Denim, A Place To Bury Strangers and The Entrance Band. With standout performances at the notorious Fusion Festival and recent support slots for Kasabian and Wolfmother, Sun And The Wolf have built a reputation for a stunning live show.