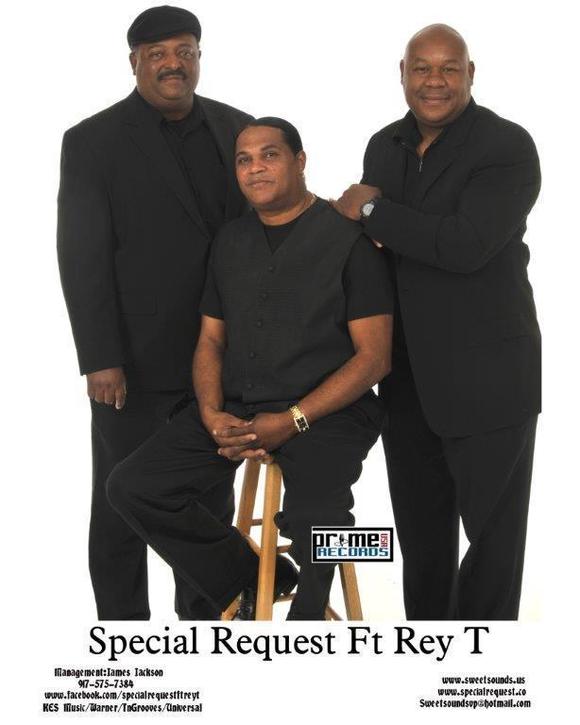 If you don’t already know them, then let me introduce you to MRE Entertainment/Prime USA Records/Blue Pie Records/Sony Red Recording Artist, “SPECIAL REQUEST“.

This is one of the best R&B/Pop Bands I’ve had the pleasure to know of. Each one of them individually are sensational performers and they have managed to blend their sound into a truly special form of music that is all their own.“SPECIAL REQUEST” has reached out to the world with their music in Tours, Special Events,Festivals, Television, Movie Soundtracks and many other venues both in America andAbroad. They have sold over 250,000 CDS from the trunks of their car and on-line.“SPECIAL REQUEST” live performance is something you would not want to miss if and whenthe opportunity becomes available for you. They hit the stage with the level of energy thattantalizes and rocks any crowd, bringing them out of their chairs and onto their feet! Special Request just has the style and showmanship that causes the audience to participate to the extent that the performance leaves them feeling almost as if they were part of the show.“SPECIAL REQUEST” Line up includes: Reynard Thomas (aka Rey T.) - Lead VocalistMark Hunter (aka Hunter) - Guitar, KeyboardGary Hunter (aka G. Hunter) - KeyboardADDITIONAL BAND MEMBERSRobert Tyler (aka Rob) - Bass GuitarDominic (aka Dom) - Saxophone, Clarinet, HornsNelson Yee (aka Nels) - DrumsNOTE: Additional Band Members subject to change“SPECIAL REQUEST”, (Rey T.), is the lead vocalist and have been around for some time. They have over 15 million plays/views on Myspace (www.myspace.com/primeusarecords.) They are on iTunes, Rhapsody, E-Music and CD Baby. They have 11 videos, which can be seen on their website(s) and www.youtube.com/reycyn. They have performed all over the Nation and Abroad. SPECIAL REQUEST CD’S“SPECIAL REQUEST” has 9 CD’s available. The 9th CD entitled “I Work” was released in February 2013. They are sure to make another deep impact in the music world as they become available internationally for live performances. You can purchase these CD’s on: Primeusarecords.com or iTunes right now. You'll certainly be glad you did!

REY T
BIOGRAPHY
Reynard Thomas (a.k.a. Rey T.) was born in Oakland, CA and started singing at the age of just Six (6) years old, but it wasn't until he was Sixteen (16) that he started singing professionally with his group “The Nine Lives ". They won every talent contest they entered; singing at school functions, dances, sock-hops, and Jr. and Sr. proms. They were so busy singing at other functions, that they completely missed their own, but that was okay as they were on their way to becoming one of the hottest groups in the Bay Area. It wasn't long before The Nine Lives was touring and performing their first recording “It’s a Grand Day” and “Just for Fun “written by their manager Steve Rein.
The Nine Lives would spend Rey T's teen years traveling around the world singing and dancing and honing his talent. Which, later, would set the stage for when Rey T would become the lead singer and main focal point of Raymar, and the release of his 1st single “I Erotic” on the “Music Inc. of Oregon.” However, after having moderate success, Rey T started the group that would change his life forever, " SpeCial ReQuest”. Special ReQuest would go on to release their first single “April Fool " and then Six (6) albums would follow closely behind such as: Pour The Wine, I Know A Secret, Tease, Heavenly eyes, Special Request , The Red Album.
Rey T. didn't stop there. He and SpeCial ReQuest went on to sign with Tate Music Group (TMG) and are about to release their Seventh and most anticipated Album entitled " I'm The Only One ,” in which the title track spun up to #8 on the World Charts. Big things are in store for this chart topping group with a range that allows him to sing any and all genres. These qualities are why Rey-T is the ultimate entertainer rather than just your run-of-the-mill musician with a lucky streak.
Rey T is often imitated, but never duplicated. His signature voice has given him longevity in this ever changing world of music. Once you hear his music once, there's no doubt in anyone's mind that you’ll be able to recognize his voice from a mile away. One of a kind, and a fantastic performer, Rey T is a widely known musician who is in it for the music.
After the release of his current single “Get Sexual” some of Rey’s recent press includes placement in The Rhythmic Lounge Magazine, a live FM Interview on KRYC Rhythm 105.9 FM’s ever so popular Business Report and several high profile blog placements. With a voice like Rey T’s the possibilities are limitless; in 2013 he will dominate airwaves with his sultry and unforgettable sound.