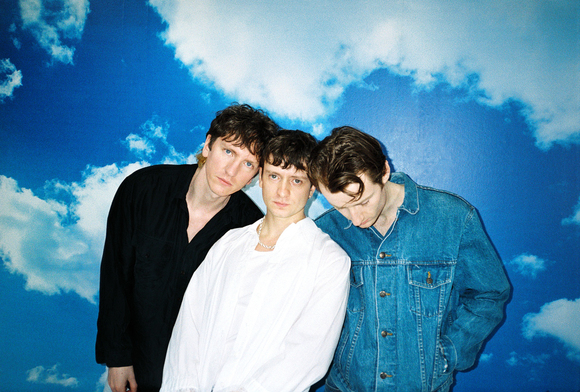 SPARKLING - Not The Right Place

Hailing from a city that birthed the like of Krautrock, and with LCD Soundsystem’s Al Doyle and Hot Chip’s Joe Goddard on production reins, Cologne-formed trio Sparkling’s upcoming EP “This Is My Life / Das Ist Mein Leben / C´est Ma Vie” is already a store sleeve divider writer’s dream.

Brothers Leon and Levin Krasel, together with Luca Schüten, are more than just great on paper, though. Their new EP is an adrenaline rush of a journey that traverses Europe, drawing on French electronic music, the urgency and ferocity of English post-punk and the throbbing pulse of krautrock. “Our music is partly about the importance of sticking together as European citizens” they say. “There is so much cultural density and diversity in Europe which is amazing. In our music we take all these influences from the European music landscape. From French Electro to English Post Punk to German Krautrock and Electronic music. It’s amazing how much you can explore in the different countries.”

Formed while the trio were studying at University and Art School in Cologne, Sparkling developed a reputation live in their homeland for hot, heady and sweat-drenched live club room sets. A move to London and a debut EP followed, titled "This Is Not The Paradise They Told Us We Would Live In" produced by Moses Schneider, before the group worked with Stereolab’s Andy Ramsay on their debut LP "I Want To See Everything". A jagged, quick-witted set of ten pop-flecked post-punk tunes, it broke them out of Germany, garnered them radio play on BBC Radio 1 and 6music and led to an invitation to play at Austin’s SXSW.

“This Is My Life / Das Ist Mein Leben / C´est Ma Vie” stands on those same post-punk foundations but expands on them and – with the influence of Doyle and Goddard – sees Sparkling giddily move further towards the centre of the dancefloor. Lead single “C’est Ma Vie” is the sort of irrepressible hands in the air indie anthem that defies resistance. A song about self-doubt and regaining self-confidence, it’s cathartic in its sense of unashamed grandiosity and positivity in contrast to the twin troubles of the pandemic and Brexit that the group have drawn influence from.

“Struggling with self-confidence is a common thing and it´s good to reassure yourself that you have the power to break out of it” the band say. “After lockdown we want to scream ‘this is my life this is where I want to be c´est ma vie!’ on the top of a hill. This song is a reminder to yourself, that this is your life!”

Much of the EP was recorded at Doyle and Goddard’s new studio on Brick Lane and so is adorned by the duo’s collection of old synthesizers. They only had a short time together and worked day and night for five days. However, the urgency befits the rush of the recordings: it’s a snapshot, with nothing too overthought and instead left to feel and emotion.

Ultimately “This Is My Life / Das Ist Mein Leben / C´est Ma Vie” is a celebration. It’s about coming back out into the open after months inside, it’s about celebrating the diversity of people rather than viewing our differences something to negate and control. Sparkling are a band who looks beyond borders and seek new terrains and this EP is a testament to that both personally and musically.