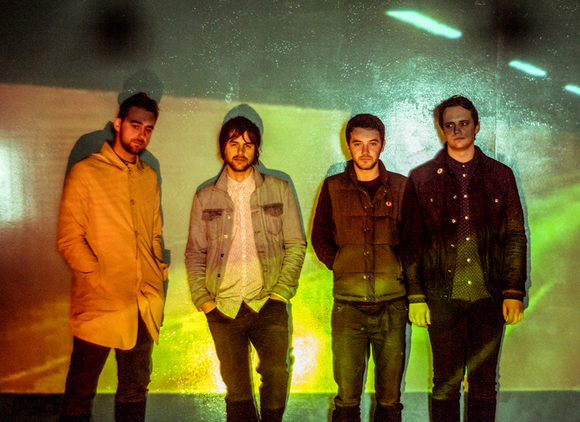 Drawing inspiration from a wide range of sources to create their own unique sound.

Sonic Hearts Foundation are one of those bands that seem to come from nowhere. Just as likely to be lost in the broad spectrums of music mythology as they are to go on and achieve super stardom.

The band wet their toes in 2012 testing the waters with their raucous debut single “The Storm” causing more than a few ripples on the blogosphere amongst the ones in the know. Plaudits came from all round with one exclamation from across the pond summing the Glasgow based outfit as “a band with big ambitions creating a unique sound within the indie rock landscape” (Given and taken in ink) - but that’s just the start.

The band have become somewhat of an enigma aided by their reluctance to toe the line with the norm. This is a reputation reinforced by the bands series of unique gigs from Glasgow to London. Gigs which are high in excitement and unrelenting in ambition from the visual installation events to the impromptu guerrilla gig to 2000 Pete Doherty fans, the latter of which resulting in the arrival of an incensed fleet of Glasgow’s police riot vans. Not even a hefty fine from the procurator fiscal can deter this band on their musical quest.

2013 sees Sonic Hearts Foundation step it up a gear with the release of their debut EP “Into forever”. The four track EP recorded in their home studio gives a snapshot representation of the bands unique and varied sound, an unapologetic sound which refuses to be tied down. The varied four track EP contains elements of ambient, noise, alt rock, eerie synth lines and even Krautrock. With the lyrical doctrine cantered around the four main reoccurring themes of Time, Nature, Death and War giving an insight into the minds of the band.

The release of ‘Into Forever’ has already brought interest and gained the band a feature and review in one of Scotland’s top music magazines ‘The Skinny’. ‘’Glasgow's Sonic Hearts Foundation claim to have three album's worth of material under their collective belt, and it shows – from the opening electronic pulses of the EP's final and most impressive track, 1984, there is a brash confidence on show that belies the band's collective youth’’ (The Skinny)

If ever there was a band doing things their own way creating their own world, its Sonic Hearts Foundation.