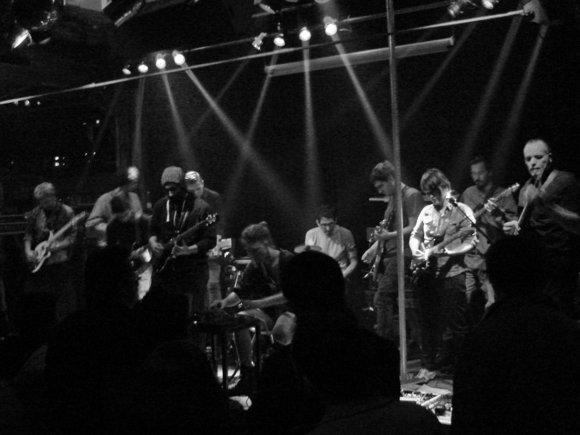 The Soft Power Ensemble of Vienna was created in 2013 as a guitar-based free improvisation project, and grew to reach now 10 guitarists and 2 drummers.

It gathers women and men from Austria, Poland, the USA, Colombia, Argentina and France – all actively involved in the Viennese rock and improv scenes – who get together to further an uninhibited music based on urgency, intensity, exuberance and electric guitars!

Born in the early 1950s, the symbol of postmodern pop culture, alive more than ever in the 2010s after it’s been allegedly made obsolete by synthesizers or computers, the electric guitar always allowed the exploration of the edges and margins of music. Even if it got its fame from being the key instrument of mainstream pop music, it’s been and stays intrinsically an experimental instrument, the unique merging of human body and electricity. But it’s also the instrument of the individualist ideal, in which the guitar hero plays alone in front of the adoring crowd! So when the electric guitar is the basic instrument of all an orchestra, and not any orchestra, one that promotes the challenging, difficult but rewarding practice of collective improvisation, its musicians are not anonymous, they are all heroes! This is the spirit of the Soft Power Ensemble of Vienna.