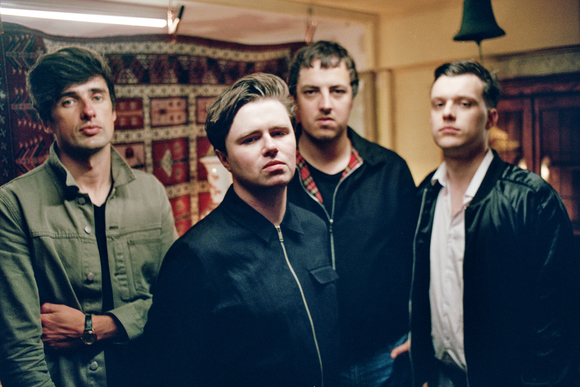 Formed of Niall Clancy (bass, vocals), Aaron Duff (guitars) and Paul Cosgrave (drums), and having recently recruited a second guitarist in the form of Fonda's Liam O'Connor, early demos of ‘Demons’ and ‘Cooper’s Dream’ were immediately praised by fans and caught the attention of London label Straight Lines Are Fine, who in the summer of 2015 recorded their sell-out debut EP ‘Cathedral’ at the Manic Street Preachers’ FASTER studio in Cardiff with Kevin Vanbergen (The Pixies, The Maccabees, Dinosaur Pile-Up, The La’s and Biffy Clyro).

Since then the band has been hotly tipped by tastemakers both in Ireland and the UK, with Drowned In Sound, Q Magazine, The Line Of Best Fit, Hot Press and The Irish Times, amongst many others citing them for big things. Follow up single ‘Trophy Wife’ earned the band plaudits from Shaun Keaveny on the 6Music Breakfast Show, Radio X, Absolute and was a mainstay on the band’s native Today FM with DJ Paul McLoone declaring Slow Riot to be “my new favourite Irish band”, a proclamation he backed up by inviting the band in for a live session and booking them to open his stage at 2016’s Interlude Festival. McLoone has since broadcast one of the band's gigs live in it's entirety on his evening show.

On the live front Slow Riot have been honing their craft supporting the likes of The Twilight Sad, Mission Of Burma and Girls Names, and have played two London headline shows for Communion / Kilimanjaro to sold out crowds, plus appearances at Electric Picnic and Other Voices. The band signed to London label Killing Moon for their single ‘Absent Dreams’ before returning to Straight Lines Are Fine for the follow-up, ‘Pink December’. The band are now finalising their debut album for release in 2018. Slow Riot are at the forefront of an exciting new wave of Irish acts about to break through.