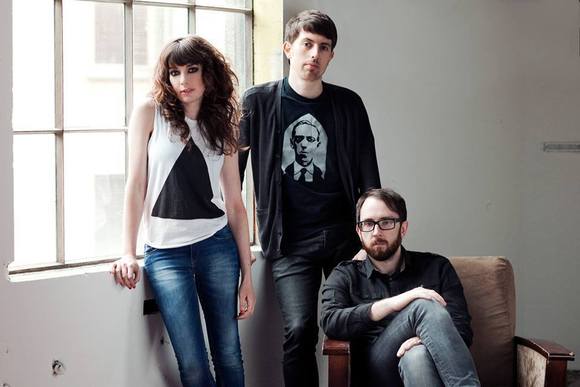 The Dublin-dwelling trio met through Twitter where they bonded over film soundtracks and vintage synths. This musical friendship was solidified in the recording of their self-released EP, Islands in 2012, which garnered accolades from the press. Sleep Thieves count taste-maker blogs such as The Line Of Best Fit, Under The Radar, MTV Iggy, Pigeons & Planes, Huffington Post and The Guardian as fans through widespread coverage of their debut album You Want The Night, released in June 2014..

If Kate Bush had joined Enya and Bat for Lashes to pen a soundtrack for Jane Eyre this album could be it. Haunting, dreamy and cinematic, it opens up and rolls in like a storm over the moors, calling out to a forgotten love, enticing and caressing the listener.

Sleep Thieves have performed at shows and festivals in Europe and USA such as Electric Picnic (est 50000 attendance), FILTER Magazine curated Culture Collide San Francisco and Los Angeles and have played with acts such as Metronomy, MS MR, Gazelle Twin, Wild Nothing, Destroyer, Austra, St Etienne, Maximo Park, and Spector (UK). The band's following is now truly international, with over 2.25 million plays via Spotify - fans from all corners of the world listen, follow and share the band's music online.

Sleep Thieves are currently touring in Ireland and 2015 will find them again in Europe, and the US. They will definitely entice you to stay up late, whether to dance or drift off in a daydream, but you won’t hold that against them.

After seeing them live, The Irish Times tagged the band "noir-disco" and first album single City of Hearts perfectly captures that sound. The band describe their music as the sonic realization of memories, visions, emotions and experiences, set to a backdrop of the city skyline, inspired by its perpetual pulse.

"Imagine Siouxsie Sioux collaborating with Depeche Mode; the wonderful chaos meets the intense, sometimes ethereal backdrop. Sleep Thieves have made something remarkable in You Want the Night. It's an album that will fill any stage, anywhere in the world. This is one of the best albums that you'll hear in 2014." - Dan Hegarty, RTE 2fm/RTE 2XM

"Dublin-based trio Sleep Thieves make perfect music for a late night drive through quieting streets, past twinkling lights and the occasional wanderer-the sort of music that sits wonderfully alongside the work of groups like Glass Candy and Chromatics" - Pigeons and Planes

“Taken from their similarly titled new album set for release this June, You Want The Night is a darkly hypnotic and throbbing sample of new-age electro that sits somewhere in between Chromatics and Drive soundtrack alumni Desire.” - The Line of Best Fit

"Like Phantogram with a disco fetish, Dublin's Sleep Thieves utilize ethereal female vocals and dance beats that would make Giorgio Moroder proud. City of Hearts has a late-night vibe, which makes us wonder if Johnny Jewel had anything to do with it." - MTV Iggy

“‘You Want the Night’ is one of the best Irish albums that I’ve heard in a while and their cinematic, haunting but entirely danceable set was brilliant from beginning to end. Sorcha Breenan effortlessly owns the stage and her voice is just superb. Looking at her I was constantly reminded of Roisin Murphy. Yes, they’re that good.” - Joe.ie