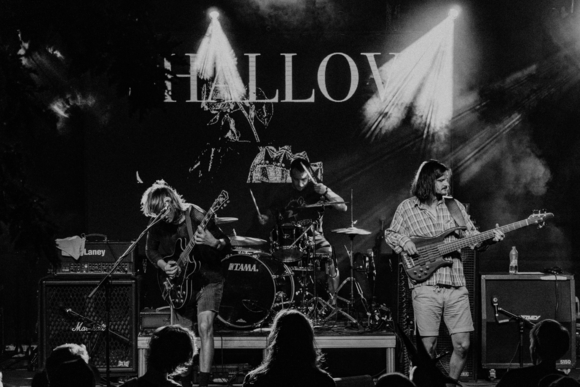 Their performance captivates the audience in an emotional rollercoaster - immersively atmospheric, aggressive, hypnotic, dark. While their studio work is rather clean, layered and rich in production, their live performance gives their songs a bit different, much more straightforward punch, performed completely live. Shallov have so far released four records and have performed more than 150 times, at all kinds of venues, bigger stages and exotic DIY spots too.

Shallov was formed in a garage of Bratislava in 2013 where their first DIY release “no place for two” was recorded and after a few member changes it’s steadied as a three-piece, consisting of two brothers Viktor Ori and Dusan Ori and their long time friend Erik Bachorec. Since then they’ve released two studio records: “concrete & glass“ (2017), compress, expand (2019) and an audiovisual single Coexist (2022). In these records, Shallov has convergentally built up their way of composition and sound, which are hearably rooted in underground post-hardcore, but mixed with many other influences in an interesting ratio. Their records were rated high in some of the most relevant alternative music magazines around. Nuskull.hu or FullMoon.cz.
They’ve performed live on the slovak national radio (radio_fm), their show was broadcasted on the hungarian national television M2 - Petofi TV and they’ve shared stage with some world-known artists such as Birds in Row (FR), Joliette (MEX), Mercy Ties (USA), Viva Belgrado (ESP), No Omega (SWE), Tangled Thoughts of Leaving (AUS), Labirinto (MEX), Les Discrets (FR), Portrayal of Guilt (USA), Kælan Mikla (IS) and many more. Shallov has so far performed more than 150 shows in 15 European countries, Iceland and at many of the local alternative festivals in and around Slovakia: Fekete Zaj, Pohoda, Sharpe, Beseda u Bigbítu, Povalec.
Their latest release is a 10-minute long composition, an audiovisual journey - Coexist, which was released with a theatral one-take slow-motion music video directed in cooperation with Adam Dragun.