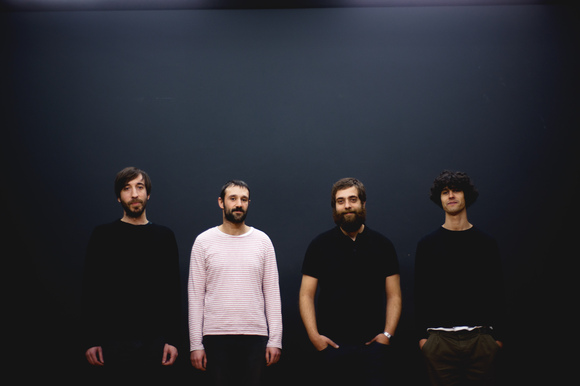 They released their first EP in 2011 and since then the band has played more than 50 concerts in all kinds of places, from bars and cultural associations to international events such as the Primavera Club, Paredes de Coura Festival or the Boiler Room. On the way they have won themselves wide and eclectic recognition.

In 2012 they released ‘Fornelo Tapes Vol.1’ and the single ‘Sofrendo Por Você’ which became a hit on their home country and opened the doors of the more mainstream media and stages. In 2014 they released their debut LP ‘8’ that was not only a commercial success but also received almost universal critical appraisal appearing in almost all the best of 2014 lists by the end of the year, including ‘Record of 2014’ by TimeOut magazine.

It’s an album that takes time to flourish but when it gets to 'AFG' and it begins to weave up handmade electronics for rural androids, it all makes sense. And one can see that this is a truly special band. TimeOut

The sound of the band is not easy to categorise but psychedelia and shoegaze are two of the "labels" that could be applied. They don’t try to hide their taste for pop melodies but the construction of their songs goes far beyond the traditional with progressive structures and arrangements. Their live shows have an extra energy and intensity that will surprise and excite even those who already enjoy their recorded work.

With their debut album getting a UK release on May 2015 and a UK tour to promoting it being announced at any moment, now is the time to hear and see this talented band.