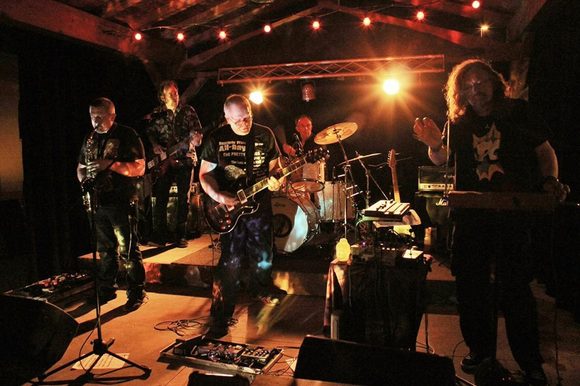 It's kind of ironic that the normally tranquil, lush hills of the welsh countryside has served as the home base for the mightily psychedelic / space rock sounds of Sendelica, a band that has been steadily gaining momentum throughout the underground scene since their inception around late 2006.

Centered largely around founding members Pete Bingham (guitars and electronics) Colin Consterdine (keys, electronics), and Glenda Pescado what initially grew out of informal jam sessions between them and a few friends has slowly over time seen the band expand and grow into an international collaborative collective taking on board musicians from both sides of the Atlantic and as far afield as Russia. With extensive touring taking in shows at Boston, New York, Providence Rhode Island, Helsinki, Riga, Moscow and St. Petersburg to name but a few of their legendary spaceship landings.

After a few self financed releases Sendelica came to the attention of the Russian indie label R.A.I.G. who have handled three of the bands studio albums Spaceman Bubblegum And Other Weird Tales From The Mercury Mind (2007), The Girl From The Future Who Lit Up The Sky With Golden Worlds (2009) and Streamedeica She Sighed as She Hit Rewind on the Dream Mangler Remote (2010).
The last few years have seen vinyl releases on Fruits De Mer, and CD releases on the French label Falling Down Records and the UK label FRG.
March 2013 saw them tying up a European licenscing deal with the album ‘The Satori In Elegance of the Majestic Stonegazer’ being released on vinyl on the Italian label ‘Vincebus Eruptum’ and June 2013 saw the release of some older material released on the Fruits De Mer’s Strange Fish vinyl LP’s
2013 also saw the release of new album The Kaleidoscopic Kat and its Autoscopic Ego being released on cd by FRG records and on vinyl by Vincebus Eruptum which was received all over the globe with glowing reviews