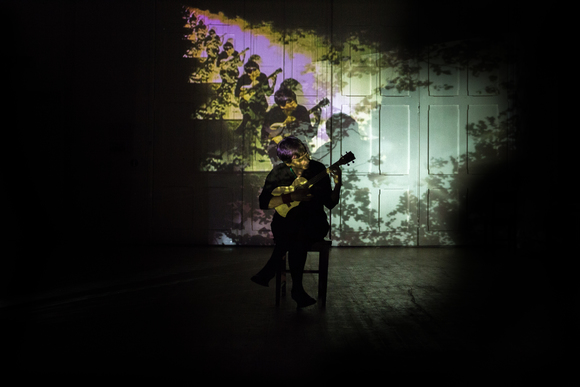 SELK, spearheaded by Anna Jordan, began as a duo with drummer Dennis Cassidy, with the intention of creating a stripped back vocal and drum ensemble.

Debut album ‘Beast’ was released to critical acclaim in 2016, receiving praise from The Outmost, Hot Press, The Irish Times, Golden Plec and The Last Mixed Tape.

"…a moody and expansive work that melds indie-pop choruses with bold soundscapes and intricate production.” The Outmost

"…an atmospheric, evocative, and at times, sinister collection.” Hot Press

SELK came into the orbit of Emmy winning composer Javier Navarrete (famed for his stunning score for Guillermo del Toro’s cult classic 'Pan’s Labyrinth' to which he received an Oscar Nomination) when he heard Anna perform a stripped back version of her song ‘Moments’ at a house party (just vocals and ukulele) and he was inspired to compose an orchestral score to complement and elevate the song, which was released on AMS Records in February. 'Moments' was recently played on John Kennedy’s X Radio show in the UK.

Further collaborations followed. ‘Silent Sea’- a rework of Anna's piece from her debut EP Dust – was released in May. Javier approached this piece by weaving ambient electronics throughout the song to create something haunting and quite unique, that captured Tony Clayton-Lea and he wrote a SELK feature in The Irish Times.
Anna Jordan has established herself as a serious composer with contributions to soundtracks for movies such as 'Snap' directed by Carmel Winters (Float Like A Butterfly) and 'Breakfast On Pluto' starring Cillian Murphy.
Anna’s moving compositions lend well to film and more recently SELK’s track ‘Salt’ was added to the soundtrack of 2019 thriller ‘Greta’ starring Chloe Grace Moretz, with ‘Salt’ subsequently becoming SELK’s most successful release to date.

“It’s clear when listening to 'Moments' that it was crafted by two artists who are incredible at their craft. The track is studded with dark imagery, and the inherent theatricality in Jordan's fluttering vibrato calls back to the golden age of Hollywood.” - Hot Press

“'Silent Sea” is a striking tune that shines a light on Jordan’s velvet voice and the deft interplay between the original song’s airiness and Navarrete’s weaving ambient/electronica.” – Tony Clayton-Lea of The Irish Times – 2020