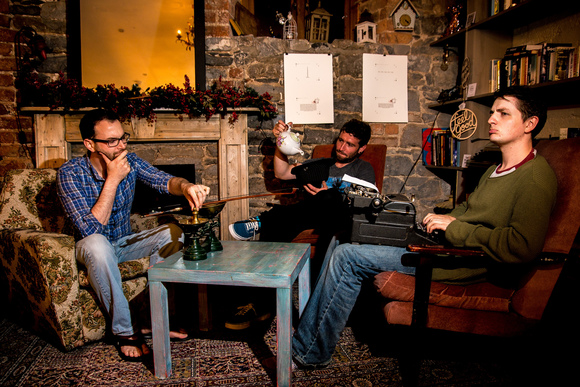 They began arranging songs that Sean had written over the years and created a sound they can truly call their own, weaving powerful vocals and meaningful lyrics over an intricate interplay between the guitar, piano and cello. With each instrument alternating between aggressive, lyrical, and atmospheric they show off their many influences of traditional Irish music, jazz, blues, folk, funk and many more by writing original songs that create a sound like no other. The enjoyment and passion that Sean's Walk get from playing and performing their music can be clearly heard in their upbeat and heart-felt music. Over the years their music has brought Sean's Walk to perform at venues such as Dolan's, The Academy, Sweeney's, Whelan's The Mercantile, INEC and more, where they had both headlining gigs and support slots for artists such as Lisa Hannigan, Declan O' Rourke, Paddy Casey, Hermitage Green, Kila, and Kathleen Turner. Sean's Walk have also performed at music festivals such as Electric Picnic, Soma Festival and Helium.

Born in Germany to a musical family of 7, Sean moved to Ireland when he was 3 years old. He was brought up amongst many musicians who were mostly from a traditional background, but as he grew older he was introduced to many other musicians from different genres. After growing up playing the fiddle from the age of 7, he began playing guitar at the age of 12. This was also when he started writing songs after having learnt his first three chords! From studying Irish Music and Dance in the University of Limerick, Sean has befriended many other musicians and his musical preferences were widely expanded. All of these factors have influenced his style of singing, playing, and writing, which led to the creation of Sean's Walk.

Born in Arkansas in the United States, Alec has been a classically trained cellist for the past fifteen years and has performed in many professional symphonies over the past five years. In 2007, he started playing the Irish whistle and went on to pick up the Irish flute six months later. Having found a love for Irish music and culture, he moved to Limerick, Ireland to pursue a Master's degree in Irish Traditional Music Performance on the flute at the University of Limerick in 2010. During his time in Limerick, he has had the opportunity to study under several masters of the Irish flute and to make music with some of the best musicians in the world. He decided at the end of his term that he would like to enroll in the optional second year of the degree and to change his specialization from flute to cello. He used that time, learning from many different tutors on various traditional instruments, to learn how to further the role of cello in traditional Irish music. It was during these years, he was able to meet Sean O'Dalaigh and Ciaran McLoughlin and utilize the different influences of his cello playin, such as Natalie Haas and Rushad Eggleston, along with other folk, classical, and other varied genres to become the cellist in Sean's Walk.

Ciarán hails from Moate, County Westmeath and comes from a family steeped in Irish traditional music. He began playing music at the age of five, giving his first public performance two years later. Ciarán started playing piano at the age of seven and took up the guitar in his early teens. He is in his final year of study for a B.A. In Irish Music and Dance at the Irish World Academy of Music and Dance, University of Limerick. His playing is greatly influenced by bands such as the Dire Straits and Fleetwood Mac. He has performed with such artists as The Chieftains, Donal Lunny, Mícheál Ó Súilleabháin, Niall Keegan and Martin Tourish.