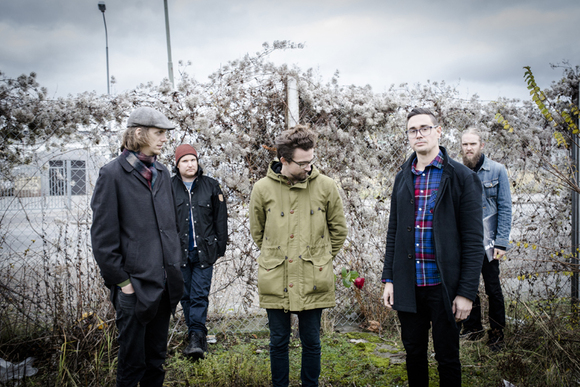 A quintet that is ever evolving and is always going from
strength to strength. There are no taboos or musical barriers that stands in
the way of this band, one of the very best Sweden has to offer. It is a madness,
the sixth, that washes over us. But do not be afraid, dare to embrace it.

Scraps of Tape was formed in 2001. Even back then, one could discern the beauty
in the mix that the early releases consisted of, a fascination for noise, agonizing
melodies, godlike post-rock fused with heavy hardcore. In a big melting pot. And
always with the heart on the sleeve. This has continued and evolved into a well-oiled
machine that produces the finest of rock music. With a mind armed with fighting
spirit, melodies to kill for, with distortion and feedback that paralyzes and a hypnotizing
battery, Fredrik, Jerker, Marcus, Johan and Kenta is set to release their fifth
album Sjätte vansinnet.

“The name ‘Sjätte vansinnet’ (Swedish for ‘The Sixth Madness’) pinpoints much with us. That
sixth sense that we all in the band seem to share, something greater than ourselves, which
in fact may be some kind of insanity. It is something that drives us forward and gives us so
much, while also pushing us closer and closer to the edge of the abyss. The sixth madness is this incredible gift given to us which eventually will probably destroy us, but until then we will enjoy it, and ride the storm until it throws us off. We think anyone who’s ever been part of a larger creative project knows what we are talking about. This is our sixth madness.”
- Johan G Winther, Scraps of Tape

Sjätte vansinnet was recorded during a couple of hot summer days in May 2013, in the Malmö-based Discrete Motion Recordings studio under the supervision of Erik Sunding. The album follows a common thread that the band carefully has created via the Grand Letdown (2009) and Resident Flux (2011), the two latest albums that cemented the band’s strength in writing, frankly, ridiculously awesome rock music.

It’s indie rock that wants to challenge, energetic music that invites you to a sound
just beyond the ordinary and templated. There is an impressive breadth within the unit Scraps of Tape, a creative core that expresses itself in a variety of other musical projects such as Lymland, Blessings, Vädret and Tsukimono. Something that indicates a width and a will that is put together into something bigger, a focused album - Sjätte vansinnet.

It would be easy to draw reference points such as Joan of Arc, Logh or Mogwai when you describe Scraps of Tape, and it’s not completely wrong. Rather, it is pretty spot on. One thing though; Scraps of Tape has always been characterized by an uncompromising integrity and a personal touch that distinguishes the band. And it makes them a winning quintet. Sjätte vansinnet is the result of all of this. Five songs on the A side, five songs on the B side. An indispensable collection of songs everyone should embrace.