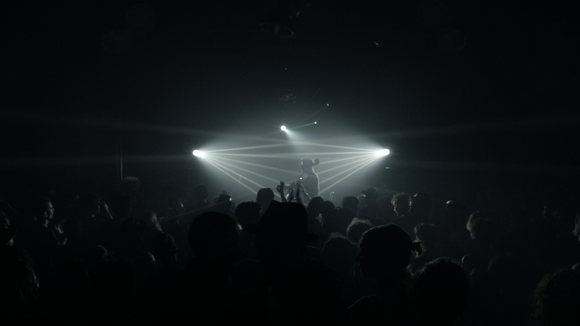 Schattenspiel is an electroacoustic show that combines deep and melodic techno with live cello.

Imagine Schattenspiel as a surprising live special at a club night or outdoors at a festival with the first sunbeams coming up. Exclusive events in exceptional locations like a cave, castle or an old ship intensify its unique character.

On a 60-minute journey the audience dives into a variety of cinematic spaces:
In an intro of electronic soundscapes shadows grow as the moon rises. A sudden turn into a dubstep drop causes a thunderstorm of flashing lights on the dancefloor. Fog enters the room in a spheric breakdown and assumes a ghost-like character as wind starts to blow.

Besides fixed parts the well-dramatised concept also leaves space for free parts where musicians and light artists improvise together and increase the tension with the audience.

Looking for new ways in club culture, our idea is to stimulate the audience’s perception. Schattenspiel is contemporary nightlife entertainment to explore music and emotions on more levels than just the euphoria of dance.

Paul experiments with combining the fine and organic sounds of acoustic instruments with the more mechanical flow of electronic beats. He takes his inspiration from improvised studio sessions with different instrumentalists. His idea is to not let the instruments try to imitate an electronic device, but to give them their own role in an authentic way. To create a unique space he uses real ambient sound sources, recorded in special environments, like in the mountains, an old chapel or the London Tube, for example. On stage these elements come together and interact with each other.

With all show elements Moritz follows the literal meaning of Schattenspiel (shadow play). He shows the artists as silhouettes throughout. Mostly bathed in white & blue moonlight the room changes color slightly depending on the mood of the show. Accurately timed special effects like moving LED clouds, projections and fog shapes along with common club light, warp the space and make Schattenspiel a deep and epic journey into a parallel world.
It is a modular setup which is convertible according to location and budget.