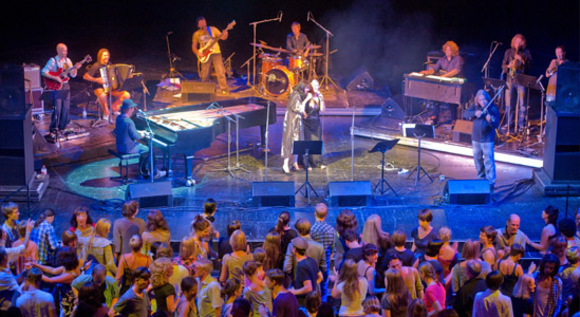 Dear Ladies and Gentlemen,  Sandy Lopicic and his new 11-piece-Band "Sandy Lopicic Superstvar" is going to release  their long-awaited new album "A Fist Full Of Love" in May 2014. Further on there is going to be a release tour! For booking and available dates feel free to contact us.

Lopicic is back!
Ten years ago, Sandy Lopicic Orkestar was one of the most sophisticated balkan bands in europe. they became legend even before they split in 2006.
Afterwards Sandy Lopicic was „off“ to work as theatre director and composer.
Now he started his musical comeback with a new 11-piece band, the Sandy Lopicic Superstvar. (Super thing)
After recording the new Album „A Fist Full Of Love“, they are going to promote it on their upcoming tour in 2014.
Like on the first two CD’s of the SLO, again the MAGIC VOICES (Natasa Mirkovic, Vesna Petkovic, Jelena Bukusic) are lightening the sound of the band.