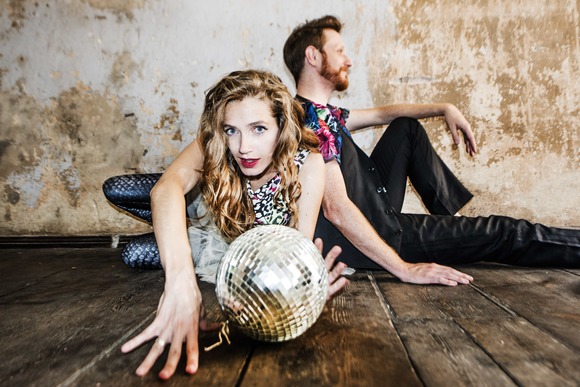 SAN IMA, that stands for “the Saint of Now”, is an electronic music project born between cultures, rooted in Berlin, founded 2012 by the Brazilian singer and former DJ Anaís Furtado and the Spanish musicologist Alejandro Pardo.

San Ima calls it's music style Worldtronic – a musical meltdown of electronic music, alternative pop with a touch of brazilianidade. Anaís sings and writes the lyrics, Alejandro plays the keyboards and creates the electronic arrangements.

SAN IMA performed in Fusion Festival, Bi Nuu, Kater Holzig, Karneval der Kulturen, Klunkerkranich and AT.Tension Festival, among yearly tours in Spain, Brazil and Goa. Some of SAN IMA’s highlights: playing at the beach in India among cows and under a sand storm, opening the concert of Brazilian Grammy-Winner Céu in Berlin and being finalists of the Creole Global Music Contest in Werkstatt der Kulturen in 2016.

In 2022 SAN IMA brings a new repertoire, a collage named Mad Medleys: a musical trip through Pop history, evolved with electronic sounds, deconstructing what you already know. The duo mixes, for example, Rolling Stones with Tones and I, changing the lyrics where they find a bug.
„We bring the known to the unknown. We search for new meanings! And you guess the songs.
Cause all in all, music is therapy. Memories are powerful and and we just want to have fun!“, SAN IMA 2022

During the summer of 2022 SAN IMA toured with the Mad Medleys around Spain and Portugal. The duo also played a summer residency in the open-air location Gestrandet, in Berlin. The repertoire brings the collection of medleys created by the duo during the pandemics out of virtuality. The medleys mix up to six different songs of pop history, in english and portuguese, questioning and transforming their discourses.