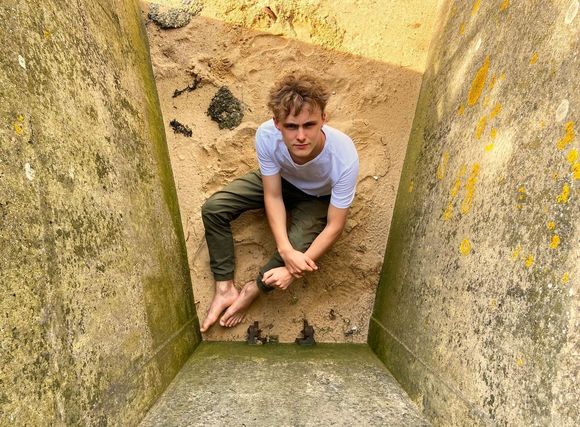 I TRY TO KEEP MY MUSIC AS PURE AN EXPRESSION OF MYSELF AS I POSSIBLY CAN".

21-year-old Sam Eagle, is a songwriter, producer and multi-instrumentalist from the coast of Essex. Fresh from releasing two critically acclaimed EPs, Sam cites an eclectic range of artists as influences such as David Byrne, Radiohead, Thundercat, Nick Hakim and Kendrick Lamar. However, Sam doesn’t endeavour to replicate these artists musically but credits their inspiration in terms of approach and their attitude to experimentation and composition. The result is an artist with a collection of songs that are powerfully imaginative, honest, and most importantly impossible to pigeonhole.

Receiving strong support from a growing fan base of music fans across the country and with a loyal community forming around his music over the pandemic dubbed the 'SamCammunity'. Support from BBC Introducing on BBC Radio 1, and BBC 6Music namely from Tom Robinson, with debut single '15/8' being chosen as 6Music ‘Tune of the Week’. In 2018 Sam and his live band performed at LATITUDE, The Great Escape Festival, as well as playing live radio sessions on BBC Radio 6Music (Tom Robinson), and Radio X (John Kennedy). 2019 saw Sam and band play SXSW Festival in Austin, Texas - leading to Sam signing to legendary indie label, Cooking Vinyl.