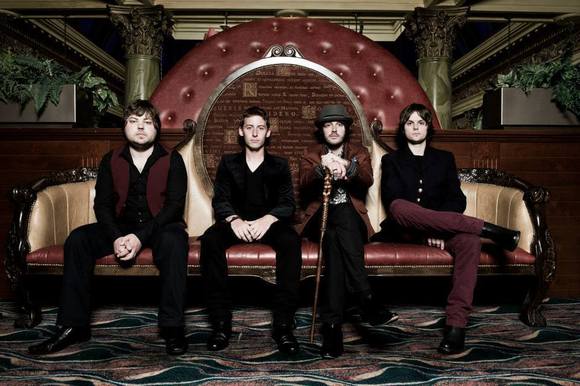 Sal Vitro are a dynamic and gritty stomp rock band, noted for their mesmerising live performances.

Mixing ingredients from rock ‘n’ roll, blues, funk, soul and pop, they have created a sound and style all of their own.

Their debut album Cirque du Sleaze, recorded in Jam Studios, Co. Meath, is due for release in 2014. It showcases an intricate weave of musical genres and character-driven, New Orleans-esque lyrics delivered with refreshing zeal and fervour.

"Seriously. These boys know how to cook... A stand out album.
Funky, groovy, soulful, rockin'. It's all here." - Marty Miller, Radio Nova

All four have since matured into seasoned performers, touring Ireland extensively and playing some well received introductory dates in the UK. The band have also had the honour of opening for acts such as Jack L, Pat McManus, Thin Lizzy, Status Quo and Jeff Beck.

“…if young Dublin band Sal Vitro were intimidated by either the big stage or the musical icons they were supporting, they didn’t show it. Instead they tore through a sizzling set of hard rock numbers that felt fresh, yet totally in tune with the classic rock sound of bands like Thin Lizzy. The sold out crowd were more than impressed by the young rockers, chanting their name and roaring in applause...” - Bernard O’Rourke, GoldenPlec

The band were also honoured to be invited to perform at the 27th and 28th annual ‘Vibe for Philo’, playing to a capacity crowd at the Button Factory and Vicar Street respectively.

"Soulful beyond belief. There is only one thing wrong with Sal Vitro;
their frontman Josh Dunford isn’t black!" - Smiley Bolger, ‘Vibe for Philo’ 2013

Sal Vitro’s work to date has won many plaudits, including those from DJs Dave Fanning (2FM), Pat Courtenay (Radio Nova) and Marty Miller (Radio Nova). Their YouTube channel has racked up 40,000+ hits so far, and their social media pages are growing steadily.

To find the flavour of this sonic gumbo, bring the maximum r’n’b laid down by The Who and Dr. John’s Louisiana ‘fonk’ to the boil, add in the rich guitar textures of The Stone Roses and season generously with the growly tones of an early Kings of Leon.