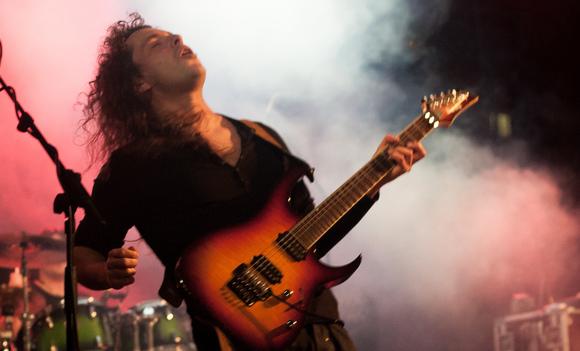 Robert Rodrigo is a Spanish guitarist from Vizcaya.

At the age of 7 he began playing Spanish guitar, at 14 he started learning electric guitar, and at eighteen he was already playing on several bands and writing his own songs, including "La Primera", achieving more and more exposure. At the age of 24 he signed his first ecording contract with the label Evolution Records, releasing their first album "Robert R. Rodrigo".
In January 2002 he started the band Airless, and they quickly signed with Vinny Records. Their debut self-titled abum was released in June, distributed throughout Europe, Canada and Japan. A year later he contributed to the double disc compilation "Singing to the World", in memory of those killed in the bombing of the Twin Towers in 2001.
In August 2005 Robert signs a contract with the brand Ibanez instruments, becoming their endorser. Airless release their second album titled "2nd Round" on the Finnish label Lion Music, one of the most important record labels in the rock industry. That same year Airless went on tour introducing the album and opening for bands such as Dare or Riot.
In September 2006, Robert recorded the song "Space Antz" together with producer and guitarist Carlos Creator, and the song becomes part of the compilation album "The Alchemists II - 15 Tracks Of Total Guitar Wizardry" which also featured other world-class guitar players, released by the British label Liquid Note Records the following year.
In May 2008 he released his first instrumental album, "Half finger on the moon", and signed for Orange amps and Dimarzio as their endorser. Later that year in September, Airless releases their third album titled "Fight".
In September 2009 Robert he was hired for Ernie Ball, one of the world's leading manufacturer of premium guitar strings.
On March 9, 2012, coinciding with the anniversary of the tsunami that hit Japan, Robert Rodrigo participates in the EP "Help for japan", a project by Tommy Heart (Soul Doctor, Fair Warning), gathering a lot of friends to record a version of "Help!" by The Beatles. That very same month saw also the release of Robert's second instrumental album, "Wrath", on the American label Grooveyard Records.
Airless release their fourth studio album titled "Changes" again on the Finnish label Lion Music in February 2013, and later went on tour with artists such as Jeff Scott Soto, Harem Scarem and playing festivals as Rock Legends, North Metal, etc...
In January 2014 Airless release their 15th anniversary album "Best of & Rarities" on the label Melodic Rock Records.
In 2015 Robert participates in a trilogy of albums for Lion Music, dedicated to great composers of classical music, Bach, Mozart and Vivaldi, where he adapts the following pieces:
1-Robert Rodrigo - Brandenburg Concerto No 4 Andante Bwv 1049 (JS Bach)from the album "Lion Music presents: Johann Sebastian Bach - Interpretations" (departure January 23)
2-Robert Rodrigo - Eine Kleine Nachtmusic Movt 4 (WA Mozart)from the album "Lion Music Presents: WA Mozart - Reincarnated" (date July 17)
3-Robert Rodrigo - Storm At Sea (A.Vivaldi)
Airless record a new ep, It's released on 15 January 2016, including their single "Hey Money" with over 40,000 views on youtube. Currently are tourning.
Their guitar player Robert Rodrigo plays in the final of Guitar Gods Festival, celebrated in Miami on February 19th 2016, with many of the best musicians in the world on this genre (Yngwie Malmsteen, Steve Vai, Gus G, Nicko MacBrain, Rudy Sarzo...)