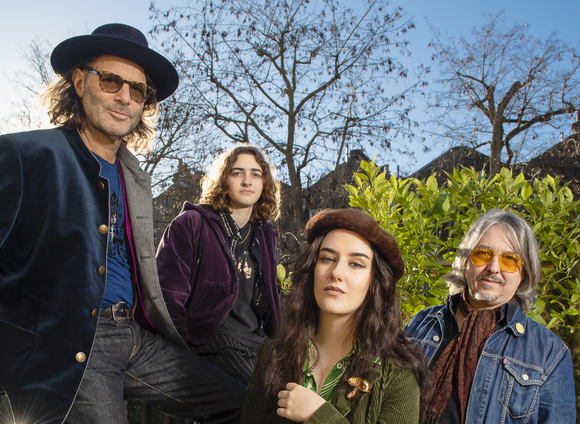 Rowsie sound like a car crash between Wilco and Sonic Youth while listening to the best indie rock mixtape you made for the girl who left you.

A factory worker from New York, an English baroque pop singer-songwriter, a Canadian filmmaking composer and a London jazz musician who got together in the summer of 2021 to play, write and record music they like.

Main man Richard Rothenberg moved to London as the United States got a little hot in 2016. He arrived and set about getting back to his creative and music roots in the UK’s capital. He built himself a small studio to write and work from and when the time was right went out to find the people who would make his band come alive.

Through Sixty Sixty Sounds on London’s famous Denmark Street he met drummer Jess ‘the roller’ Rollason who was hanging out and jamming at the store. Next he met producer and writer Alan D Boyd who was writing with Vaccines guitarist Freddie Cowan at Richard’s studio over the 2021Covid lockdown, inviting him to start working together. Boyd brought in Kents finest baroque pop songwriter Holly Henderson who has some serious skills on the guitar to add the final element.

Influenced by Wilco, The Clash, Dinosaur Jr, The Replacements, Brian Eno and The Hold Steady ROWSIE will release their first single in 2022. The band are playing regular shows at Sixty Sixty Sounds on Denmark Street as they build their own studio there where Richard will also be launching Ivy Rec-rods: his own indie label.

ROWSIE are accepting serious offers for gigs around the UK, Europe, US & Canada. We can get there if you got a reason to be there.