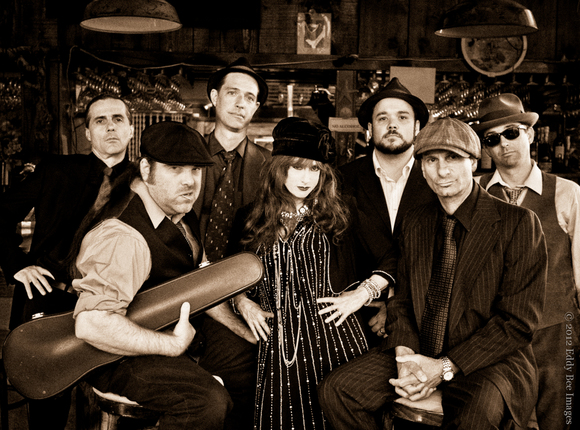 AN EVENING OF HIGH ENERGY ENTERTAINMENT with the multi-talented AWARD-WINNING singer/composer/producer ROBERTA DONNAY and the PROHIBITION MOB BAND.

"A modern take of the hot swingin' jazz and sultry blues of the 1920s and 30s that will make you want to dance all night!" - Verdi Club

DONNAY’s music and voice can be heard on film and TV, YouTube and all major music outlets, Donnay & the Prohibition Mob Band just completed their 3rd CD together, a tribute to Louis Armstrong (released 2018 on Blujazz is “My Heart Belongs To Satchmo”.)

Midwest Record just posted:
BLUJAZZ
ROBERTA DONNAY & the Prohibition Mob Band/My Heart Belongs to Satchmo: Going off on her own since Dan Hicks passed, she evokes all the eras of the past that have touched her and does it without nostalgia or self consciousness. Doing it with real love for what it is and imbuing it with her passion, this full length tribute to Louie Armstrong has got to have Satch smiling down on it. Evoking the jazz age like it's happening in real time, the velvet vocals, the crack backing crew and the entire vibe is a big, fat home run. You don't have to like oldies to love this, it's real music for real ears.

“Roberta is a consummate performer and producer. Her passion for the roots of jazz music is remarkable, and her joie de vivre is contagious in the best possible way." - Jana Herzen, President Motema Music

"Award-winning vocalist and songwriter Roberta Donnay is that rare species of musician who almost lives in another time... she and her Prohibition Mob Band exist to revive the Jazz Age of America." - Critical Jazz

Donnay wrote the song “One World” which became a theme for the United Nations 50th Anniversary and has been performed the world over, at world peace events on 5 continents, it also became the theme for South Africa's World Aids Day.

Donnay’s interest in roots jazz music was inspired from the radio, recording with legendary jazz producer Orrin Keepnews, and touring 10 1/2 years as singer/percussionist with Dan Hicks & The Hot Licks.