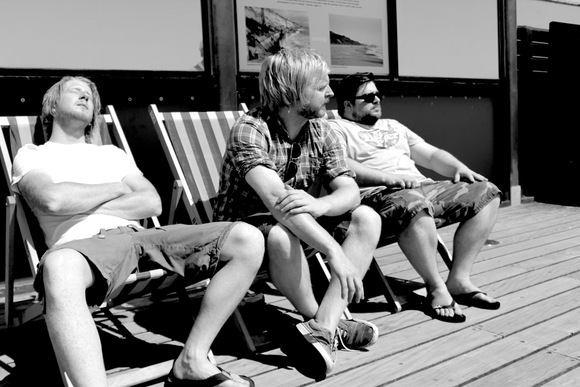 Rhoda May are an instrumental progressive rock band from Surrey, UK. Active since 2013.

In May last year RM recorded a debut EP labeled 347 Live Session. Available on self release, it was filmed & performed live in its entirety with producer Jason Wilson (We Are The Ocean, Reuben, Dinosaur Pile Up) at his studio in Hampton.

Since RM have shared stages with the likes of Senser, Heights, Freeze The Atlantic, Three Trapped Tigers & Jamie Lenman.

"This instrumental trio bely their home county roots with angular, progressively minded music that's rock-muscular, indie-intelligent and prog-dynamic. Rhoda May have everything it takes to tear the nu-prog scene a new one very soon.”
Prog Magazine

“Rhoda May have carved a wonderful little niche as an instrumental version of Biffy Clyro mixed with In Case of Fire and a additional helping of Tool thrown in for good measure.”
Total Rock

“The sheer amount of talent present on the Sessions EP is astronomical. If you’re a fan of bands like And So I Watch You From Afar and 65daysofstatic, then Rhoda May is definitely a band you should check out.”
Dead Press

“A masterful and magnetic slice of sonic majesty. Songs which tease and ignite the imagination without ever over doing anything... Something that is original and fascinating.”
The Ringmaster Review